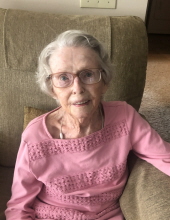 Blanche Snyder, 97, passed away Friday, April 29, 2022, in Moorhead, MN. She was born March 24, 1925, in Overbrook, PA, to Gladys and Theodore Mehl. On September 17, 1949, Blanche was united in marriage to William M. Snyder. Their first child was Carol “Lee” Snyder, born in August 1950 and their second child, William M. Snyder Jr., was born in March of 1953. They resided in King of Prussia, PA, until Bill was transferred to Minneapolis, MN, to start Sid Harvey’s Heating and Air Conditioning in 1964, residing in Edina, MN.

Bill passed away in 1998 and in 2000, Blanche moved to assisted living in Eventide, one block from her daughter, Lee. Blanche lived at Eventide until her birthday in 2022, when she moved to the care center at Eventide due to declining health.

Blanche held a variety of positions throughout her life. She was a stay-at-home Mom, stenographer, Girl Scout leader, camp counselor, lifeguard, secretary/bookkeeper, and preschool aide. She worked with Bill for many years at Sid Harvey’s as a bookkeeper/secretary and as a tour guide for Winnebago. Her last job was as a secretary at Honeywell in Minneapolis.
Blanche enjoyed many activities. In her younger years, she swam, skated, danced and played several sports on school teams. As an adult, she enjoyed bowling, pool league, square dancing, red hats, and get-togethers with the Winnebago club. She “loved” to travel and went to all 50 states, 49 of them in their Winnebago. Bill and Blanche were “snowbirds” going each winter to Mission, TX. She sold their home in Mission a couple of years after Bill died.

A Celebration of Life will be held at a later date.

To order memorial trees or send flowers to the family in memory of Blanche M. Snyder, please visit our flower store.