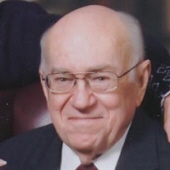 Billy Smith, 85, Moorhead, MN died peacefully in his home surrounded by his family on January 22, 2020 and is now resting comfortably in the arms of our Lord Jesus Christ.

Billy Rex Smith was born August 31, 1934, in Shawnee, OK to Rex Alexander and Fannie Mae Smith. He graduated from Shawnee High School in 1952 and enlisted in the U.S. Army in 1953, serving in Heidelberg, Germany. In 1960, he received a degree in mathematics from Oklahoma State University.
In 1961, he married Mary Kathryn Hemmelgarn at St. Henry's Catholic Church, Perham, MN. They lived in Long Beach, CA for a short time and then made their home in Dallas, TX. In 1990, they moved to Moorhead, MN. Billy was an active member of St. Joseph's Catholic Church.

During his time in Dallas, he was a pioneer of the computer programming field working for many companies as an employee, contract programmer, or consultant. He was also a partner in three software/consulting companies. After moving to Moorhead, he was a programmer for Blue Cross Blue Shield of ND in Fargo. He took early retirement from BCBS in 1998. After a few weeks he realized he wasn't ready for retirement and joined SPARAK Financial Systems. He retired from there in 2006. He was a dedicated programmer for over forty-five years. He always found it challenging and never lost interest in it.

Billy was a loving husband, father and grandfather. He was very proud of his two daughters and their families. His happiest times were spent with his family at the many dinners and parties and just sitting around the campfire at the lake. He greatly enjoyed his grandchildren's concerts, plays, recitals and sporting events. Billy also enjoyed woodworking, American history and classic automobiles.

Visitation for Billy will be Sunday, January 26, 2020, from 5 PM until 7 PM, with a prayer service at 7, in Korsmo Funeral Chapel, Moorhead. His funeral mass will be Monday, January 27, 2020, at 11 AM in St. Joseph Catholic Church, Moorhead. He will be buried at St. Henry's Catholic Cemetery, Perham, MN.

To order memorial trees or send flowers to the family in memory of Billy Smith, please visit our flower store.