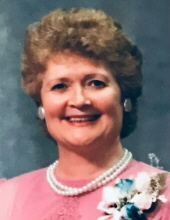 Beverly Jane Wagner (nee Thorson), quietly joined her beloved husband Leonard in eternity, in the peace and knowledge of the Lord, on September 30, 2022, at Sanford Hospice House in Fargo, ND.

Beverly was born on November 10, 1934, in Hawley, MN, to Hinton and Grace Thorson. Beverly was the oldest of five children and had three sisters (Jodi, Carol, and Pam) and a brother (Wally). In the late 1930s, Beverly and her family moved to Hawthorne, CA, where her parents worked in the aviation defense industry in the run-up to WWII. In 1941, they returned to Minnesota, settling in Dilworth, where her dad worked for the railroad and Beverly graduated from high school. In 1952, she met the love of her life, Leonard Wagner, a Navy veteran and trade-school teacher, at a dance at the American Legion Hall in Fargo. They were immediately smitten with one another. In 1954, they became one in marriage and began their journey as a Christian family beginning in Moorhead, MN, and moving to a farmstead in Glyndon, MN, in 1971. Once empty nesters, they sold the farmstead in 1991, returning to Dilworth to live out their retirement.

Beverly loved music and especially singing. She had a beautiful voice and was featured on WDAY radio’s local talent program in the early 1950s. Music (and her voice) would fill the house as she completed her myriad of duties caring for her small army of a family. She also enjoyed other artistic pursuits including drawing, painting, and crafting. These are talents manifested in her children, grandchildren, and great-grandchildren. Beverly had a lifetime passion for fishing, which she pursued with a zeal that at times led to humorous situations we recall with fondness. She had a green thumb and her large garden in Glyndon provided all manner of vegetables, which she distributed both fresh and canned for her family and friends. She turned that garden bounty into the finest of home cooking which her family, relatives, and friends appreciated. Of her many qualities, none was finer than her love of and loyalty to family. She cherished her children and despite some of our shortcomings, she loved us all unconditionally. Her legacy was her family; by that measure, she lived a full life.

A Visitation for Beverly will be Wednesday from 5:00 PM until 7:00 PM, with a 7:00 PM, Prayer Service in Korsmo Funeral and Cremation Service, Moorhead.

A Graveside Service will follow in Moorhead Memorial Gardens, Moorhead.

To order memorial trees or send flowers to the family in memory of Beverly J. Wagner, please visit our flower store.