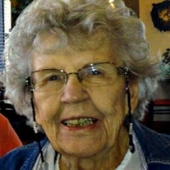 Bernice "Bunny" Rosella Stadsvold, 95, Moorhead, MN, died Saturday, December 3, 2016, with her family at her side, at her home, under the loving care of her family and Hospice of the Red River Valley.

Bernice Rosella Hennen was born February 8, 1921, in Moorhead, to Peter and Olga (Olson) Hennen. She grew up in rural Moorhead, and graduated from Moorhead High School. After high school, she went to work for the Agricultural Adjustment Administration with two of her lifelong friends, Emily Houglum and Ardella Midgarden.

On September 2, 1945, Bunny married Francis Stadsvold in Norfolk, VA. After the war, Frank and Bunny moved to Montrose, CO. In 1948 they left the mountains with their first child to return to Moorhead. Frank worked for the Fargo Forum and Bunny raised four children. For twenty-five years, Bunny helped with Frank's hobby, Harley Davidson Sales and Service, in Moorhead. Bunny also enjoyed playing bridge, her "sewing club", and Sundays with the family and her parents on their farm in south Fargo. Frank passed away in 1996.

Bunny started her second career working at the driver's license bureau in Moorhead, where she gave driver's license tests for over seventeen years. She retired at age seventy-three. She and Frank focused their attention to long summers at their lake home, weekends with the kids and their friends, and the always plentiful raspberry patch on Lake Maud.

Bunny sold her lake home and returned to summers in Moorhead and her new hobby of estate sales and refurnishing furniture. She always had a chair or table to refinish and continued to attend sales until last year.

She was preceded in death by her husband; parents; brother, Kenneth Hennen; and sisters, Eleanor Miller and Mildred Budge.

Memorials are preferred to St. Joseph's School or Hospice of the Red River Valley.

Visitation will begin at 10 AM, with the funeral mass at 11 AM, Wednesday, December 7, 2016, in St. Joseph Catholic Church, Moorhead. Burial will take place in St. Joseph's Catholic Cemetery, Moorhead.

To order memorial trees or send flowers to the family in memory of Bernice "Bunny" Stadsvold, please visit our flower store.