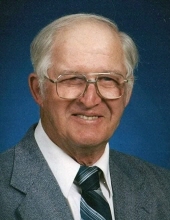 Bernard John Ohnstad was born September 21, 1924, on the family farmstead in rural Argusville, ND, to Bennie and Lucy (Kolosky) Ohnstad along with his twin brother, John Ohnstad, He attended Pleasant Valley District 61 rural school and later attended further education at Wahpeton State School of Science. He was drafted to the United States Army and was stationed in Fort Bliss, TX, where he served as a first loader on an anti-aircraft gun for Battery D, 95th AAA Gun Battalion (90 mm). He was honorably discharged from the Army and returned home to help his dad on the farm. Farming was his life. He worked many years helping his parents with the land and the livestock. When his dad retired from farming, Bernard continued farming and raising cattle. He spent many years milking cows and later raised beef. He farmed until he was 85 years old and then his nephew, Kevin, continued farming as the 4th generation to farm the land since 1881.

Bernard also served on the Wiser Township Board for many years and was a lifelong member of Western Minnesota Stream Threshers Reunion in Rollag, MN, and the Sons of Norway. He was also a member of the American Legion and the Eagles. In the early 1950’s he was one of the volunteers helping to build the new St. John the Baptist Church in Georgetown, MN, at which he was a lifetime member.

Bernard married Eleanor Eaton on March 27, 1981. They made their home on the farm. They worked together for many years until moving to Moorhead. They enjoyed going out dancing.

Bernard was quite the handyman. He overhauled his trucks and tractors. He loved to do woodwork. He built his own speedboat, a grandmother clock, and many clocks of different shapes. Many of these he gave away as gifts. Bernard loved animals, which included a black and white Border Collie named “Charlie”, and many barn cats, and even a family of skunks. He had a great sense of humor and loved to laugh. He always had something funny to say, especially one-liners. Bernard taught Kevin and Bennett many life lessons about life and work on the farm.

He was preceded in death by his wife of 35 years, Eleanor; parents; twin brother, John and younger brother, Jim; and nephew, Bennett Ohnstad.

Memories and condolences may be shared on our website at www.korsmofuneralservice.com
(Korsmo Funeral and Cremation Service, Moorhead, MN)

To order memorial trees or send flowers to the family in memory of Bernard J. Ohnstad, please visit our flower store.