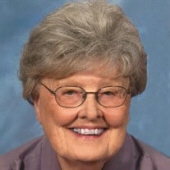 Beatrice was born May 28, 1920, in Nevis, MN, the only child of Oscar and Lottie (Larson) Nygaard. She grew up in Nevis and at the age of thirteen, became the church organist playing for both the Norwegian and English services. At age fourteen, her mother died very suddenly and a year later, she and her father moved to Rochester, MN. She was very active in the 4-H Club and she graduated from Rochester High in 1938.

In 1940, Beatrice graduated from Lutheran Bible Institute in Minneapolis, MN. She attended practical nurse's training at the Samaritan Hospital in St. Paul, MN, after which she worked as night nurse at the North Dakota House of Mercy in Fargo. She then worked as a medical assistant in Minneapolis for ten years. In 1955, Beatrice moved to Longview, WA, where she became a parish worker at Emmanuel Lutheran Church.

In 1959, Beatrice married Orville Stenerson of Dodge, ND. They made their first home in Hettinger, ND. While there, she worked part-time at the hospital and also as parish secretary at the church. Their two sons were born in 1961 (John) and 1966 (Dan).

In 1966, the family moved to Bismarck, ND. In addition to raising her sons, she also coordinated the Meals on Wheels program for 10 years. In 1992, Beatrice and Orville moved to Fargo.

During her adult life, Beatrice was very active in the activities of whatever church she was attending, including the choir, youth work and women's groups. In 1989, she was a delegate to the first ELCA General Assembly in Chicago. She also sewed quilts for Lutheran World Relief for 30 years.

She and Orville enjoyed traveling. They visited 48 states and 14 countries including the Holy Land.

Visitation will begin at 9:30 AM, followed by a funeral at 10:30 AM, Monday, January 19, 2015, in Olivet Lutheran Church, Fargo. Burial will follow in Riverside Cemetery, Fargo.

To order memorial trees or send flowers to the family in memory of Beatrice M. Stenerson, please visit our flower store.