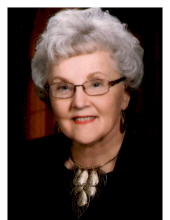 Audrey J. Bueide, age 89, was reunited with her beloved husband in the Kingdom of Heaven on October 4, 2022. She passed peacefully in the company of family at the Sanford Hospice House in Fargo. She was diagnosed with terminal cancer just a few weeks earlier.

Grandma (we think that was her favorite among many titles) was born June 5, 1933, to Kelly and Mamie Peterson in Northwood, ND. She attended a country primary school near the farm where she was raised. She graduated from Northwood High School at the age of 16, as she started school one year early when her older brother started school. She then moved to Moorhead, MN, and attended Concordia College for a year. Unable to complete college due to finances, Grandma then began a long career in the Fargo-Moorhead area as what we would refer to today an administrative assistant. For the bulk of her career, she worked at the Eastern North Dakota and Northwestern Minnesota Synod offices of the ELCA. She served seven Bishops in total, retiring in 1998.

Grandma met her soulmate, Jerry, through mutual friends when he returned from active duty during the Korean Conflict. They were married September 26, 1953, at West Union Lutheran Church, rural Northwood, ND. They celebrated 56 anniversaries together before Grandpa passed away in 2010. Grandma lived and loved after that but missed him deeply, every day.

Grandma was very active in church and civic activities throughout her years. She was a member of Pontoppidan Lutheran Church in Fargo, ND, for 70 years, where she participated in Circle, WELCA, quilt-making, card-making, choir and served on call committees. She reached 5,000 volunteer hours at Sanford, mostly greeting patients and family at the Broadway facility and showing them to their destinations there. Grandma also volunteered in various capacities at Oak Grove Lutheran School and Sons of Norway.

Grandma was first and foremost a people person and most happy when she was with family and friends. She and Grandpa had several friend groups that gathered often. She loved the holidays and all other family time, both with her immediate family and with her siblings, siblings-in-law, nieces, nephews and their families. Whether at home, at the lake, one of our houses, at church, in Northwood, on a trip or even just on the phone, she loved connecting with family and friends and cared deeply for all of them. She was very proud of and adored her grandchildren and especially enjoyed attending their sporting, music and other activities. However, she was the consummate homer, who never missed a chance to scold the refs (mostly under her breath, of course). That flaw aside, Grandma was a kind, caring, selfless, devoted and faith-filled woman. She deeply influenced and will be greatly missed by her family.

In lieu of flowers or other gifts, please consider giving memorials to Pontoppidan Lutheran Church, Oak Grove Lutheran School or another charity dear to you.

Visitation for Audrey will be Saturday October 15, 2022, starting at 9:30 AM and continue until the time of her funeral service at 11AM in Pontoppidan Lutheran Church, Fargo. Interment will be in Riverside Cemetery, Moorhead.

To order memorial trees or send flowers to the family in memory of Audrey J. Bueide, please visit our flower store.