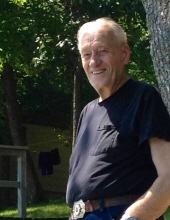 Arthur Peter Anderson, Dent, MN, died Thursday, July 21, 2022, of natural causes, and was surrounded by his family at his time of death.

Art was born April 1, 1935, in Dilworth, MN. He was the youngest of 13 children. He is survived by his sister, Lavina Ratcliff; his daughter, Kimberly Anderson (Eric Gregory) of Portland, OR; his son, Kipp Anderson (Nikkol Anderson) and their three kids, Maxwel, Regan, and Kendel, all of Moorhead. He was preceded in death by his wife, Ruthann Anderson.

Dad was quite the athlete in high school and excelled in football and basketball. After high school, Dad served as an infantryman in the US Army during the Korean War and was stationed in Hawaii. Following his tour of duty, he started his family. He worked as a railroad switchman, first on the Northern Pacific and then on the Burlington Northern (BNSF) for 40+ years. Mom and Dad retired to East Silent Lake in Ottertail County, MN. After mom's passing, dad spent 20+ happy years at East Silent surrounded by woods and water.

Dad's interests and hobbies were many, including hunting and fishing, ceramics, dog shows, cooking and baking, cribbage and pinochle, roller skating, reading westerns, and rooting for the Twins and Vikings. He was also a member of the Fraternal Order of Eagles.

Being a brother, uncle, father, and grandfather was dad's greatest pleasure. He gave much of his time and energy to his family and making sure we had everything we needed.

Dad was always giving his time or talents to others in one way or another... whether it was his time, being a chauffeur to and from kids activities, hand carving diamond willow canes to give away to those in need, filling the multiple feeders at the lake to nourish all the critters, giving us guff, making us laugh, throwing out an "Art-ism" while his blue eyes twinkled, and maybe the most endearing part of his legacy, making and distributing his WORLD FAMOUS caramels at Christmas!

We will miss you, Arthur. You were a great friend, sibling, uncle, grandfather, and dad. Your legacy will live on with every caramel that is made and enjoyed!!

To order memorial trees or send flowers to the family in memory of Arthur P. Anderson, please visit our flower store.