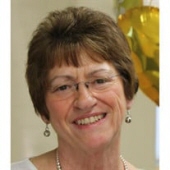 Ardell Wold, age 71, of Felton, MN, died on Friday, August 14, 2020, in her home in Felton, surrounded by her family, and under the care of Hospice of the Red River Valley.

Ardell Ilene Slininger, daughter of Russell and Lorraine (Benesch) Slininger, was born in Ada, MN, on Jan. 28, 1949. She grew up on the family farm near Ada, and graduated from high school in Ada in 1967.

On December 31, 1967, Ardell married Larry Wold, in Grace Lutheran Church, Ada. They made their home Felton. Ardell worked in a number of jobs, including for local farmers, at the Viking Manor in Ulen, MN, and at the Moorhead (MN) Library, which she retired to start her dream work as a Massage Therapist that she loved doing.

Ardell was an active member of Gloria Dei Lutheran Church, Felton, and active in her community. She enjoyed traveling, gardening, and baking. She was known for her wonderful rhubarb crisp, her cookies, and her banana bread. She was a loving wife and mother, and her world revolved around her five grandchildren, Destiny Wold, Keagan Kawlewski, Jacob and Bree Bellemare, and Bailey Wold.

Ardell is survived by her husband, Larry, of Felton; a son, Dennis, Williston, ND; daughters, Carrie (James) Bellemare, Fargo, ND, and Amanda (Matthew) Carlsrud, Moorhead; her five grandchildren; and three siblings, Carol Sturdevant, Dean (Antoneta) Slininger, and Eunice Slininger. She was preceded in death by her parents, and a sister, Beverly Jacobson.

A graveside service will be held in the Felton Cemetery, at a later date.

To order memorial trees or send flowers to the family in memory of Ardell Wold, please visit our flower store.