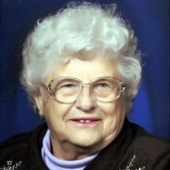 Ann, daughter of Joseph and Isabella (Zabielski) Prosby Sr., was born July 17, 1927, in rural Morken Township near Felton, MN. After the early death of her mother in 1931, she and her brother stayed with Zabielski relatives in Chicago, IL. In 1933, she and her brother returned to the farm. The two were then raised by their father and grandmother.

Ann graduated from Moorhead High School, Moorhead, MN, and furthered her education at Interstate Business College in Fargo. She then worked as a cost accountant and banquet manager for the Gardner Hotel in Fargo.

She married Robert C. Hovdestad of Moorhead on June 13, 1948, at Trinity Lutheran Church in Moorhead. They had met when Robert returned from the Army and found a new girl living with his Findalen relatives. In 1950 they moved to their own farm, where she helped her husband and earned household money with an annual planting of flax.

Ann had many interests: She gardened both vegetables and flowers, visited neighbors, made crafts, painted, played cards, wrote to pen pals, and read mysteries. She had served as president of the local PTA in Glyndon, MN, president of the ARC in Moorhead, member of her local Homemakers Club, 4-H leader, member of Catholic Daughters of America, member of the Ladies Aid at St. John the Baptist Catholic Church in Georgetown, MN, and she was one of the first volunteers at the Heritage Hjemkomst Center in Moorhead. The biggest thrill of her life was visiting her forever pen pal at Mount Vernon Station in Meekatharra, Western Australia.

Visitation for Ann will be held one hour before her service. A Mass of Christian Burial will be on Saturday, September 26, 2020, at 11 AM, in St. Joseph Catholic Church, Moorhead, MN. Burial will be at Wildrose Cemetery, Georgetown, MN. Due to CDC and Minnesota state guidelines, masks and social distancing will be strictly enforced.

To order memorial trees or send flowers to the family in memory of Ann Marie Hovdestad, please visit our flower store.