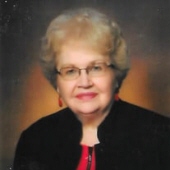 On September 18, 1951, Alyce was united in marriage to Willard A. Jensen in St. Mary's Church in Breckenridge. Willard and Alyce raised their seven children in Breckenridge. They moved to Moorhead, MN, in 1974, and enjoyed the winter months in Mesa, AZ. Willard passed away January 16, 2001.

Alyce enjoyed making and decorating cakes, swimming, going for walks, crocheting, and knitting. She was a member of Christian Mothers in Breckenridge, and St. Joseph Catholic Church in Moorhead.

Visitation will be Sunday, Feb. 24, from 5 - 7 PM, with a prayer service and rosary at 7 PM, in Korsmo Funeral Chapel, Moorhead.

Mass of Christian Burial will be Monday, Feb. 25, at 11 AM, in St. Joseph Catholic Church, Moorhead.

Burial will be in St. Mary's Catholic Cemetery, Breckenridge.

To order memorial trees or send flowers to the family in memory of Alyce I. Jensen, please visit our flower store.