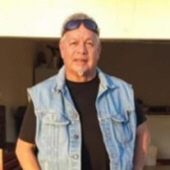 Alonzo Vega was born September 6, 1957, the son of Francisco and Julia (Gutierrez) Vega, in Elgin, IL. He was raised in Carrizo Springs, TX, where he attended school. He then began working construction and later formed Alonzo Vega Construction, which he owned and operated for many years.

In 1977, he was united in marriage to Betty Gallegos in Mexico. They made their home in Texas until 1989, when they moved to Moorhead and in 2003, moved to New Braunfels, TX. He returned to Moorhead in 2015 to be closer to his family.

Alonzo loved the outdoors, barbecuing and listening to music.

He was preceded in death by his father and brother, Johnny.

A Funeral Mass and Burial will take place in Carrizo Springs, TX.

To order memorial trees or send flowers to the family in memory of Alonzo Vega, Sr., please visit our flower store.