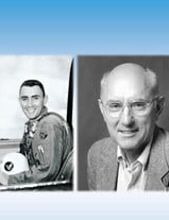 The graveside service for Allen can be viewed by following this link. We apologize for the quality of the sound but consistent 20 mph winds and subzero temperatures were challenging:
https://portal.memoryshare.com/memoryshare/videoplayer/allen-henderson-8121305

The memorial service for Allen will be livestreamed and archived. Please follow this link:
https://vimeo.com/675608004/9961f5ef6f

He was born on October 25, 1937, in Fargo, to Dr. M.S. and Ruth (Bohn) Henderson, the fifth of six children. According to Ruth, his calm, easy going nature was evident from the beginning and he was beloved by his siblings. He grew up in a home near the Red River and enjoyed many neighborhood activities including skating on the river in the winter and playing on the riverbanks no matter the season where he may have gotten into a little mischief.

Allen attended Hawthorne Elementary School, Agazzi Junior High School and Fargo Central High School. He was a good student, president of the science club, played the French horn in the band, and was a defenseman on the hockey team. As a teenager, he spent several summers working on the family farm near Tower City, ND. Before graduating from high school, Allen joined the North Dakota Air National Guard (NDANG) and worked as an aircraft mechanic until going to pilot training after his sophomore year in college. Allen attended North Dakota State University majoring in Mechanical Engineering. Upon returning from pilot training, he began dating Joyce Larson. She was the true love of his life and they married following graduation from NDSU.

They both worked for General Electric for a year and lived in Washington, Vermont and Kentucky. After that year, they returned to Fargo so Allen could pursue graduate studies and he also rejoined the NDANG. He discovered Industrial Engineering while in his graduate program and decided to pursue his Ph.D. in that area of engineering at Iowa State University where he also flew with the Iowa Air National Guard. Son, Todd, and daughter, Amy, were born while at Iowa State. Upon completion of his degree, he accepted a faculty teaching position at NDSU in Industrial Engineering, returning to Fargo in 1969 and flying with the NDANG. Daughter, Jill, was born a few years following their return to Fargo.

During Allen's tenure at NDSU, he also served as Assistant to the President for 3 years and then as Chairman of the Industrial Engineering and Management department for 18 years before returning to a professor faculty position. Allen thoroughly enjoyed teaching and was highly invested in his students' lives as well as their education. In his 42 years of service with the NDANG, he was a fighter pilot and commander in a variety of leadership positions retiring as Chief of Staff for the NDANG with the rank of Brigadier General. His involvement at the NDANG brought joy in flying, fulfillment in serving his country, and rewarding camaraderie with fellow Happy Hooligans.

Allen and Joyce enjoyed raising their children in their north Fargo neighborhood where they developed many lifelong friendships. One of those friends introduced him to Jesus as his personal Savior, and Allen identified his commitment to Christ as the most important decision of his life. Allen and Joyce were very involved in Salem Evangelical Free Church for many years where Allen served as an elder and church chairman. In addition, they have been ardent supporters of several ministries. One of Allen's greatest joys in retirement was serving as chairman of the board at Valley Christian Counseling Center. He was proof that a highly analytical engineer could learn to value and foster relationships above all else.

Allen was a devoted husband, father and grandfather and his steadfast love and support have been a tremendous gift to his family. He always prioritized time with his children and grandchildren including family trips to fun destinations and many family gatherings at their home on Blue Lake.

He was preceded in death by his parents; two brothers; and two sisters.

To order memorial trees or send flowers to the family in memory of Allen Henderson, please visit our flower store.