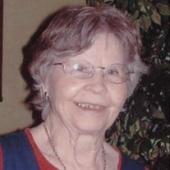 Alice Fern Rusten, the daughter of Carl and Agnes (Nygard) Rusten, was born in Osnabrock, ND, on June 19, 1925. She grew up in Osnabrock, where she graduated from high school in 1943. Alice then attended business college in Minot, ND.

In December of 1945, Alice married Wendell Johnson. They lived in Osnabrock until 1952, when they moved to Fargo, ND. In 1966, Alice and her children moved to Arkansas. They lived in North Little Rock, Horseshoe Bend and Sherwood, all in Arkansas, and in Memphis, TN. Alice worked as an administrative assistant in the Arkansas Department of Developmental Disabilities, until she retired in 1996.
In 2010, Alice moved to Fergus Falls, MN, and in 2011, to Moorhead, where she was a resident of Eventide.

Alice enjoyed gardening, painting and reading, especially poetry. Her faith in Jesus was important to her. She was an active member of Trinity Fellowship Church in Sherwood for many years.

She was preceded in death by two daughters, Karen Powers, who died in 2002, and Christine Fletcher, who died in 2016; an infant son, Garry; a great-grandsons, Elliot and Nicholas; her parents; and a brother, Vernon.

The funeral service for Alice Johnson will be at 3 PM, on Friday, July 30, 2021, in Korsmo Funeral Chapel, Moorhead, MN. She will be buried in Moorhead Memorial Gardens.

To order memorial trees or send flowers to the family in memory of Alice F. Johnson, please visit our flower store.