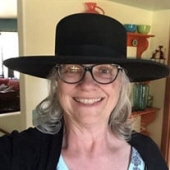 Alice Elaine (Edgerly) Robinson (1952-2020) was a vibrant woman with a zest for life, infectious smile and indomitable spirit. She was a devoted mother and grandmother who would stop at nothing to support her family. At one point, she sent them tens of pounds of beans to prepare for difficult times. At another point, she memorably ordered dozens of red glass goblets, snifters, and the like, to furnish her daughter's new living space. Alice had a passion for hiking, traveling, and gardening, and later in life taught herself to paint watercolor. Many of her works adorn furniture and items throughout the households of friends and family in Bismarck, ND, Fargo, ND and the Twin Cities, MN.

In her youth, Alice enjoyed figure skating and keeping her parents on their toes. She graduated from Fargo South High School in 1971, and from UND with a bachelor's degree in nursing in 1975. The summer after graduation, she worked in a summer camp for developmentally disabled youth. She then moved to New Hampshire where she began acute care nursing and racing dirt bikes. Feeling a need to serve a greater cause, Alice joined the Peace Corps and spent the next two years teaching nursing and providing healthcare in Kenya. The food there was generally far too spicy for her, despite requests to make it less so. Eventually a palatable spice level was found when a grandmother cooked food for Alice using methods that were typically used for cooking baby food.

Upon returning to the States, Alice took a position at Fort Berthold Community College to establish a nursing education program there. She met and married Eldon Aanerud. They had two daughters: Amanda Marie and Tania Marian Aanerud. During this time she transitioned to working at Garrison Hospital, volunteering for the Rescue Squad.

In 1999, Alice divorced Eldon. She moved to Bismarck with her daughters to be closer to the hospital that was treating Tania's heart condition. While living there she worked in several units at St. Alexius Hospital as an RN. In 2001, she married Hugh Robinson. She and Huey had whirlwind adventures traveling the world and entertaining friends and family. They were legendary for holiday parties and never missed an opportunity to make the walls roar with laughter. They remained happily married until Hugh's death in 2015.

After Hugh's untimely death, Alice struck gold once again by meeting her significant other Steve Hanna. The two of them enjoyed the outdoors and having spirited conversations. Steve treasured Alice's forthright and decisive nature and was in the process of helping her renovate her hobby farm outside of Finlayson.

Recently, Alice moved her primary residence to Fargo to be closer to her delightfully stubborn and adorable grandson, who has thus far very wholly embodied her spirit and determination.

In the end, death came for her in her sleep. If not for that, Alice would have surely put up one hell of a fight. Her reputation of indestructibility often preceded her or became apparent to others after the first meeting. Some even thought that Alice would live long enough to be cyberized - have her brain poured into a computer, which would then be put into a prosthetic body, allowing her to live forever, constantly working on making the world a better place.

People who have not even met Alice know and value her wisdom about parenting, interior design, and incoming plagues. She was welcoming and encouraging to everyone around her. When something needed to be done, it was never a question of whether something was possible, but of how the task was going to be completed. Her strength would often turn into stubbornness, as she forced fixes to problems before her. Alice would certainly give the man a fish,but would also put in all possible effort to teach him to fish for himself. In order to do her part in the effort against the current pandemic, Alice was making cloth masks for essential workers and looking up how to reinstate her nursing license to relieve her professional colleagues.
She is survived by daughter, Amanda; significant other, Steve Hanna; son-in-law, Mathew Udodovsky; number one step-son, Erick Aanerud; grandchild, Aaron; sister, Mary O'Neil; brothers, Tom (Geneva) Edgerly, Carl (Carol) Edgerly, John (Monica) Edgerly, and Richard (Carol) Edgerly; and many cousins, nephews, and nieces. She was preceded in death by her parents, Marian and Charles Edgerly; daughter, Tania Aanerud; brother, Edward Edgerly; husband, Hugh Robinson; and brother-in-law, Kevin O'Neil.
Memorials preferred to Tracy's Sanctuary House, Bismark.
A memorial service for Alice may be held at a later date.
Arrangements by Korsmo Funeral Service
Online guestbook at www.korsmofuneralservice.com

To order memorial trees or send flowers to the family in memory of Alice Elaine Robinson, please visit our flower store.