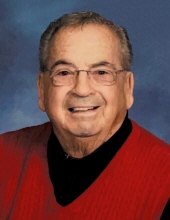 Adrian Christian Schwab, 84, of Moorhead, MN passed away peacefully on September 22, 2022, with family by his side.

Adrian was born February 4, 1938, in Strasburg, ND, to Dennis and Marie (Keller) Schwab. He was the second oldest of five boys. He graduated high school from St. Mary’s Academy in Devils Lake, ND. He earned a Hairdressing degree in 1957 from New York Academy in Fargo, ND. On October 13, 1958 he married Geneva Kimmes at St. Joseph’s Church in Devils Lake and they had five children.

Adrian worked as a barber for a year in Devils Lake. He then worked delivering beer for a year. From 1959-1963 he worked for his father-in-law at Ted Kimmes Excavating. After that, he worked for Hogenson Construction building elevators and cleaning up burned down elevators on the side. In 1965, they moved to Moorhead where he worked 30 years for Abbott, Arne and Schwindt Construction as an underground construction Superintendent. After retiring, he drove motor coach for Richards for 20 years and was one of the top requested bus drivers from coaches because he loved talking to all the kids and watching sports. He loved to fish and enjoyed sharing his catch with family and friends.

Adrian was a devoted husband of 57 years before the passing of Geneva. He will be remembered as a kind, caring and loving man devoted to his family and church. Adrian spent time volunteering at his church and Knights of Columbus. Over the years he loved watching his kids and grandkids at many sporting events and rarely missed watching a Twins game. In his last few years, he liked spending time meeting friends for breakfast at McDonalds and spending time with his special friend Darlene Saxerud.

His Memorial Mass of Christian Burial will be 11:00 AM, Wednesday, October 5, 2022, in St. Francis de Sales Catholic Church, Moorhead.

To order memorial trees or send flowers to the family in memory of Adrian C. Schwab, please visit our flower store.