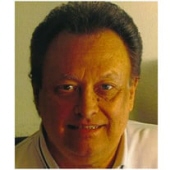 Wayne Charles Tursso, the son of John and Thais (Ash) Tursso, was born in St. Paul, MN, on September 18, 1939. He grew up and received his education in South St. Paul, MN, and later attended Brown Institute, in Minneapolis, MN.

From May of 1962 until February of 1965, Wayne served in the US Army. After his discharge, he lived in Minneapolis, Des Moines, IA, and Detroit Lakes, MN, before coming to Fargo, ND. He worked at several radio stations and sold insurance for AAA and Prudential. He worked in sales and circulation for the Fargo Forum, until he retired in 2014.

Wayne is survived by daughters, Robin Tursso and Christy (Aric) Ryland; sons, Dan Hudson and Tony Tursso; sisters, Nancy (David) Smith and Beverly (Dick) McNamara; and six grandchildren. In addition to his parents, he was preceded in death by two brothers, Nick and John.

A Visitation for Wayne will be one hour prior to her funeral service.

To order memorial trees or send flowers to the family in memory of Wayne Tursso, please visit our flower store.