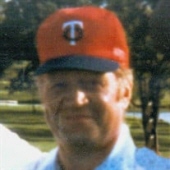 Wally "Winkie", the son of Eddie and Lillian (Hahn) Swenson, was born September 30, 1934, in rural Wolverton, MN. He grew up on the farm in Wilkin County and graduated from Breckenridge (MN) High School. He enlisted in the US Army serving in Germany as a radio specialist. Following his discharge, he returned to Minnesota to farm.

In February 1963, Wally was married to Jean Buchholz in Wolverton. They were later divorced after having had three children. He moved to Fargo where he attended Business College. He worked at Kmart before serving as a custodian at Moorhead State University and Immanuel Lutheran Church for over 20 years. He spent his last years at Golden Living Center, first at OtterTail and then in Moorhead.

One of Wally's passions was sports, specifically baseball and fast pitch softball, where his claim to fame was playing Legion baseball against Roger Maris. He thoroughly enjoyed participating in the local Roger Maris golf tournament activities. After his playing career as a catcher for many teams, he continued to avidly follow his beloved MN Twins and Vikings. He traveled to see them as often as possible. He also enjoyed playing golf, hunting and fishing.

A Visitation for Wally will be Saturday, Jan. 24, 2015, from 1 PM until 2 PM, followed by a Memorial Service at 2 PM in Korsmo Funeral Chapel, Moorhead.

To order memorial trees or send flowers to the family in memory of Wallace Swenson, please visit our flower store.