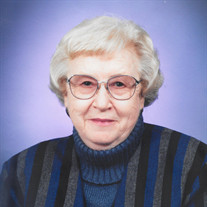 Violet Orpha Christianson was born September 27, 1923, on the family farm in Hagen Township, Clay County, MN, to Ole and Alma (Bjerke) Christianson. She was baptized and confirmed at Jevenaker Lutheran Church earning her education in a one-room school house through 8th grade. Violet then moved to a boarding house where she lived with three other girls, earning her high school diploma from Borup (MN) High School. After high school she moved to Moorhead with her sister where she worked for Holland’s Dry Cleaners for a number of years. Violet married Arnold Stronstad on February 15, 1950, in Moorhead where they continued to make their home and serve as a foster care family until they had two children of their own. They moved to Dilworth, MN, in the early 1960s where they joined Dilworth Lutheran Church and Violet continued to raise their children while Arnold worked. Violet and Arnold moved to her family’s farm near Borup in 1972, joining Gloria Dei Lutheran Church in Felton, MN. This is where she pursued her own career working as a Nurse’s Aide for Viking Manor Nursing home in Ulen, MN. In 1973 she began working for the Department of Veteran’s Affairs Medical Center in Fargo where she received the ‘Nurse of the Year’ award in 1983, followed by retirement in December 1985. After retirement Violet continued to work part-time for Polk County Group Homes in Ada, MN. Arnold passed away January 2, 1990. Violet continued to live on the farm and work part-time as a volunteer helping to care for people in their own homes. In September 2002, Violet moved to Sharpview in Moorhead where she joined Trinity Lutheran Church and continued to bake and share her creations with everyone she could. Violet was a life-long Lutheran, spending her retirement years reading, baking, crocheting, watching the Twins, working her way through Sudoku puzzles and walking when the weather permitted. Violet moved to Eventide late in September where she passed away Sunday, November 3, 2019, under the care of her family and Hospice of the Red River Valley. She is survived by her son, Brian and daughter, Sandra (Steve). In addition to her husband, Violet was preceded in death by her parents; and siblings, Kenneth, Arville, and Marcella. Visitation will begin at 9 AM, with a funeral at 10 AM, Thursday, November 7, 2019, in Korsmo Funeral Chapel, Moorhead. Burial will take place in Moorhead Memorial Gardens. (Korsmo Funeral Service, Moorhead, MN)

Violet Orpha Christianson was born September 27, 1923, on the family farm in Hagen Township, Clay County, MN, to Ole and Alma (Bjerke) Christianson. She was baptized and confirmed at Jevenaker Lutheran Church earning her education in a one-room... View Obituary & Service Information

The family of Violet Stronstad created this Life Tributes page to make it easy to share your memories.

Send flowers to the Stronstad family.