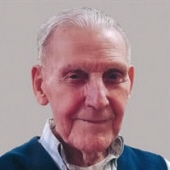 Vernon Lyle Wang was born on January 28, 1922, to Bernard and Clara (Fuglie) Wang on the family farm in rural Ulen, MN. Vernon attended country school through the eighth grade and worked on the family farm until joining the Navy in October of 1942. He was an airplane technician and was stationed first in Whidbey Island, WA, and then in Hawaii. Vernon was honorably discharged in January of 1946.

Vernon married the love of his life, Doris Boyd, on September 12, 1948, in Buffalo, ND. They made their home in Moorhead for most of their lives, except for a brief stint in Wahpeton, ND. Vernon worked as an auto mechanic all his life for different shops, including Houston-Kelly, Anderson Pontiac, and Selland Motors.

Vernon and Doris both enjoyed their weekend getaway, a cabin on Big Cormorant Lake. He was a very good bowler, enjoyed playing cribbage, and liked hunting and fishing with his nephew, Waldo Hilde.

After retiring, he helped various people with auto repairs but eventually moved on to other hobbies. He started wood carving at the Sons of Norway and took great pride in the various carvings he made, which were intricate and beautiful. In his time at Rosewood on Broadway he was known for his root beer float requests, which he enjoyed most often after playing Bingo.

Vernon's family would like to thank the staff of Rosewood on Broadway and Hospice of the Red River Valley for their compassionate care and assistance to Vernon.

Vernon is survived by many nieces, nephews, and other family. He was preceded in death by his loving wife, Doris (1989); brothers, Walter and Ordell; and sisters, Frances, Ruth, Clarice, Mildred, Eleanor, and Myrtle.

To order memorial trees or send flowers to the family in memory of Vernon Lyle Wang, please visit our flower store.