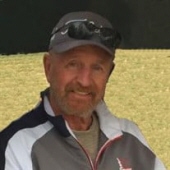 Tom was born January 26, 1949, the son of Robert and Dorothy (Recher) Brown in Park Rapids, MN. He had an idyllic childhood growing up with the river, the woods and wonderful friends. From football games on the frozen river to building forts in the forest, he never lacked for things to do. Throughout his life, he remained close with many of his childhood friends.

Tom graduated from Park Rapids High School in 1967, where he was captain of the football, baseball and basketball teams. He attended Winona State and later graduated from Moorhead State University Moorhead. Tom was a member of the TKE Fraternity. He went to work for the City of Moorhead from 1973 until 1987. In 1987, he joined the Moorhead Public Service where he worked until his retirement in 2012. He worked with a great group of guys at MPS and enjoyed their friendship throughout his retirement.

On October 13, 1983, Tom was united in marriage to Betty Broderick in Lutheran Church of Good Shepherd in Moorhead. Tom's greatest love was his family. He coached the boys in all their sports, but his greatest joy was to play a round of Golf with them. Tom was passionate about golf and passed this love to his sons.

After retirement, he fortunately found a few guys who shared his passion. Tom could be found on the golf course at least five days a week. Wintering in Florida allowed him to enjoy golf and friends year-round. In 2016, and with full cooperation of a good friend, Walt, Tom played 140 rounds of golf.

He was preceded in death by his parents; sister, Sue; and nephew, Nathan.

Memorials may be directed to the ALS Association or Hospice of the Red River Valley.

A Gathering of Friends for Tom will be one hour prior to his memorial service.

His Memorial Service will be Friday, November 3, 2017, at 3:00 PM, in The Lutheran Church of the Good Shepherd, Moorhead

To order memorial trees or send flowers to the family in memory of Thomas R. Brown, please visit our flower store.