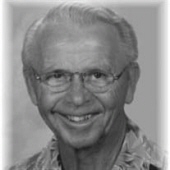 Theodore's rich life (he was affectionately known as Ted or Teddy), began on Sept. 30, 1930, at home in Prairieview Township in Wilkin County, Minn., the sixth of 10 children born to John and Hilma Olson.


He always said 9-30-30 was a good birth date because it was easy to remember.


He attended District 19 grade school through grade 8 and graduated from Barnesville High School in 1948. He was a good student, enjoyed music, and loved sports, particularly baseball.

That interest played a role in much of what was to come, including his military service during the Korean War, when he played shortstop for a traveling Army baseball team that won a regional championship in Japan.

After his service, he moved to Fergus Falls and became recreation director at the state hospital there, a career that would last 16 years. While working there, he met a nurse, Janita Overlander and they were married July 29, 1955, in Nashua, Iowa, in The Little Brown Church in the Vale. In 2005, their 50th anniversary coincided with the church's 150th birthday and they returned to the church to celebrate both occasions, along with hundreds of other couples that had married there.


With help from friends, Ted built the family home just outside of Fergus, where over the coming years he and Janita had a daughter and three sons - two of which were identical twins.

The family moved to Moorhead in 1967, where Ted worked the next 16 years for Lutheran Social Services as placement coordinator for the Svee Home, helping developmentally disabled adults find independant living and employment. Along the way, he earned a degree at Minnesota State University, graduating the same month his daughter graduated high school.


In the mid-1970s, Ted built his beloved lake home near Detroit Lakes with materials salvaged from an old school building he and friends demolished, largely by hand.


He truly enjoyed his many summers at the lake, welcoming family and friends.

In the early 1980s, Ted began a third career which also lasted 16 plus years. His job as project manager with Fargo Housing Authority was one he derived much satisfaction from
Beloved husband, father, uncle and friend, Theodore is survived by his wife, Janita; daughter, Lynda Demke; and sons Daniel, David and Scott (Clare); sisters Jeroma Hanson, Norma Mettling and Ruby Henderson; brothers Howard (Lil), Jim (Karen), and Paul (f
The family requests that in lieu of flowers, memorials be sent to: Moorhead Field of Dreams, P.O. Box 322, Moorhead, MN, 56560. Moorhead Field of Dreams is a project to beautify Matson Field, home of the American Legion Blues baseball team.

To order memorial trees or send flowers to the family in memory of Theodore Olson, please visit our flower store.