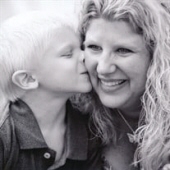 She was born to Tim and Kay (Nylen) Gassman on April 23, 1971, in Sioux Falls, SD, and raised with her sister, Kim. Tammi learned to hunt with her dad and cook with her mom. (Darn good at both.) Her parents instilled in her a great love for the people around her, a strong work ethic, and were at the base of her faith in the Lord.

Tammi started working while still at Washington High School, class of 1989; two restaurants, a nursing home, and after graduating early, started her career in banking. All the while, making friendships that would last her a lifetime.

On December 23, 1990, Tammi married Mike Mullinix and after he joined the military, Tammi continued to work in banking, making friends wherever they went. They separated and divorced while he was stationed in Grand Forks, ND. Tammi was able to transfer to a branch in Fargo, and Tammi being Tammi, continued making friends. Those new friends introduced her to Jerry Nelson. Their relationship grew around a pool table and on the dance floor and after a few months were married on September 25, 2004.

On February 19, 2010, Tammi started her greatest adventure when she gave birth to Wyatt Timothy. In April they moved to Moorhead and within days of the move, she lost her job due to a restructure, and that they knew as a new mom she wouldn't accept a new position that required a lot of travel. Those eleven months home with Wyatt were something Tammi would NEVER regret. In March 2011, she took a position with Bank of the West.

In the fall of 2013, Tammi started doctoring for a sore hip and after failed physical therapy, asked for a second opinion. After weeks of scans and tests, a cancerous growth was found on her femur. After having her hip and a portion of her femur replaced at the U of M Medical Center in late August 2014, Tammi returned to work as Vice President Operations Manager II in fraud and loss administration at the bank. In March of 2015, it was discovered that Tammi's cancer had spread to her lung and after starting treatment, had to step aside from the bank to concentrate on getting better. By June, Roger Maris Cancer Center had tried all they could and referred her to MD Anderson Cancer Center in Houston, TX. After testing, they reassured her that Roger Maris did all that could be done and suggested a trial drug study that would be opening in October. When she arrived and started the testing, she was told her cancer was too far along to take part in the study. After being flown back to Fargo, she lost her battle three days later.

A Visitation for Tammi will be Thursday, October 29, 2015, from 4 PM until 7 PM with a 7 PM Prayer Service in Korsmo Funeral Chapel, Moorhead.

To order memorial trees or send flowers to the family in memory of Tammi Kay Gassman Nelson, please visit our flower store.