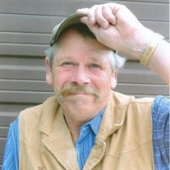 Steven Gene Jerde was born July 11, 1961, the son of Eugene "Gene" and Mary Lou (Campton) Jerde, in Hallock, MN. In his early years, he enjoyed doing anything his father was doing, especially reloading shells. During his youth, he attended Pembina (ND) High School where he excelled in sports, most avidly football. From 1979 until 1981, Steve was active duty with the U.S. Air Force where he served in the Grand Forks, ND, unit at the missile silos.

Steve married Darlyce Hemmes and they were later divorced. To this union three daughters were born, Cassandra, Christa, and Cara who were his greatest joy; as were his grandchildren, Jacob, Eloise and Theodore.

In 1984, Steve joined the U.S. Border Patrol and was first stationed in Bottineau, ND, and later in the states of New Mexico and Washington. He served as a Border Patrol Agent for 25 years until 2010 and then in the Forestry Service in Alaska until he retired from government service in 2011.

After his retirement, Steve returned to Pembina and later Glyndon where he cared for his mother. He married his best friend, Leretta Smith and they made their home in Glyndon.

Steve was happiest with afishing line in his hand, or a pheasant in his sights. An avid hunter, Steve enjoyed fishing and hunting with his wife Leretta and his life long friend and "brother" Jeff Keller. One of Steve's daughters told him he was a true cowboy, born 100 years after his time. He was at home on a horse, in the canyons, the mountains or on the prairie.

He was preceded in death by his parents; brothers, Gary and Larry Jerde; and sister, Diane Smith.

Steve will be dearly missed by his family and friends.

To order memorial trees or send flowers to the family in memory of Steven Jerde, please visit our flower store.