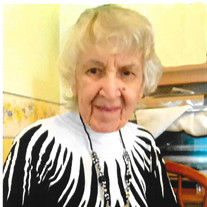 Sonya A. Bakkum was born in New London, CT, February 14, 1923.  Her Russian immigrant parents, Daniel Petrosky and Helen (Kacinska) Petrosky, had arrived on Ellis Island just ten years earlier, having brought with them sons, John and Michael.  Sonya had a sister, Anne. All of her siblings preceded her in death.  A life-long student, Sonya graduated high school in 1941, from Williams Memorial Institute.  She continued her education, nearly completing her Nursing degree before discontinuing nursing school to care for her ailing mother.  She married a Navy submariner, Robert W. Kaiser, on October 28, 1941.  Four months later, his submarine, the USS  Trout, was sunk in the Pacific Ocean, with no survivors.  Sonya found herself a widow, expecting a baby.  Her daughter, Roberta, was born and Sonya made the difficult, courageous decision to give up Roberta in adoption to a happy couple.  One of the joys of Sonya's later years was that she became reunited and acquainted with Roberta.  Sonya married another Navy submariner, Eugene Milton Bakkum, on October 17, 1945.  Their union produced five children; moreover, it provided a model of faithfulness and commitment to all those who knew them.  Gene died October 14, 1998, and Sonya said that he took half of her with him when he passed. Sonya was a great mom to her five children, and her love was reflected in the care they showed for her in her final days.  She was a curious learner, an avid reader and,at times, an eccentric soul who loved to explore everything from the Book of Revelation in the Bible to superstitions from her Russian folk culture.  She passed from her earthly travail on September 10, 2019, under the care of Hospice of the Red River Valley, her excellent caregiver, Renee Huff, and in the embrace of her children and their spouses, Eugene Jr. (Donna) Bakkum, Joyce Gray, Paul (Beth) Bakkum, and Karl Daniel (Denise) Bakkum.  She was preceded in death by her beloved daughter, Donna; and leaves behind seven grandchildren, Paul Gray, Delainia Haug, Chris Haug, Beth Bakkum (Aaron Hanson), Kate Bakkum (Jason Plucinak), Alex (Sarah) Bakkum, and Chloe Bakkum; and four great-grandchildren, Hannah Haug, Vasily Gaponenko, Max Bakkum and Natalie Bakkum. Sonya will be missed by all of us. Visitation will begin at 1 PM, followed by a Life Celebration Service at 2 PM, Saturday, September 14, 2019, in Korsmo Funeral Chapel, Moorhead.

The family of Sonya Bakkum created this Life Tributes page to make it easy to share your memories.

Send flowers to the Bakkum family.