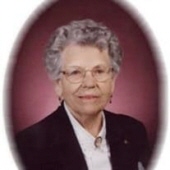 Ruth Adele Thompson was born September 27, 1915, to Thomas and Josephine (McEvers) Thompson in Baker, MN, where she grew up. She graduated from high school in Barnesville, MN, and attended Interstate Business College for one year. She then returned to her parent's farm to work for her father.

On November 25, 1939, Ruth married Lawrence Connelly in Baker and they made their home on a farm in rural Sabin, MN. She raised their five children and assisted her husband on the farm until his death in 1985. In 1995, Ruth moved to Moorhead, MN, and she spent her winters in Arizona.

Ruth was an active member of the First Presbyterian Church's in both Baker and in Moorhead. She volunteered at St. Ansgar Hospital and enjoyed spending the weekends on Pelican Lake. She was also an avid golfer.
Ruth died Saturday, April 29, 2006, in Innovis Hospital, Fargo, ND, at the age of ninety.

To order memorial trees or send flowers to the family in memory of Ruth A. Connelly, please visit our flower store.