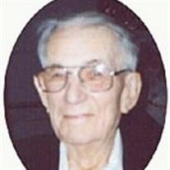 Rudolph W. Johnson, the son of Frank and Martha (Leebeck) Johnson, was born at the family home south of Moorhead, on May 9, 1908. Rudy grew up on the family farm and attended a rural school, south of Moorhead. He graduated from Moorhead High School in 1927. He then attended Interstate Business College, Fargo, ND.

On January 18, 1941, Rudy was married to Ruby Larson at Bethesda Lutheran Church in Moorhead. Following their marriage, the couple lived in Moorhead. In 1942, Rudy entered the US Army. He served his country during WW II in North Africa and in Italy. Following his discharge, he returned to Moorhead.

In 1950 the family moved to the farm south of Moorhead, where Rudy farmed for 43 years. He retired from farming when he was 85.


His family and farming were the centers of Rudy's life. He was a life-long member of Bethesda Lutheran Church, which was also extremely important to him. He was a life-member of the Moorhead VFW.

His wife, Ruby, died on October 27, 1999. Rudy was also preceded in death by his parents, three brothers, Adelbert, Hjalmer and Oscar; and three sisters, Agnes and Elvira Johnson and Edlin Skjaret.

To order memorial trees or send flowers to the family in memory of Rudolph Johnson, please visit our flower store.