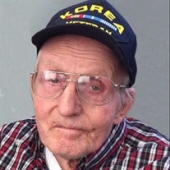 Ronald was born on June 5, 1931, in Crookston, MN, the son of Leo and Grace Capistran. He spent his childhood through his teen years in several locations - Crookston, Portland, OR, Minneapolis, MN, Rockford, IL, and Dilworth, MN. He entered the Army in 1951, serving for six months in Korea. He received an honorable discharge in 1954, and then settled in Moorhead, living near his mother and stepfather, Otto Akron.

On May 4, 1956, he married Frances Formo, and the couple made a move to Minneapolis. In addition to working several custodial jobs in the Twin Cities, Ronald pursued his passion as a landscape artist, attending night classes at the Minneapolis Institute of Art.

In 1971, Ronald and his family moved to Park Rapids, MN, where he developed his art business, painting hundreds of acrylic landscapes. For several summers he displayed his works in an old log cabin situated just across the driveway from the house. He also sketched editorial cartoons that appeared in the local newspapers. One of his favorite hangouts in town was Schwarzwald's restaurant, where he ate many a breakfast and consumed numerous cups of coffee (with lots of sugar) while reading his newspaper. He was always a night owl, watching late night TV and consuming large bowls of ice cream.

After the passing of his wife Frances in 2010, Ronald moved to back to Moorhead, and was a resident at Sharpview, Eventide Fairmont and Eventide on Eighth before his passing. In recent years, if you were to ask him how things were going he would quietly reply, "Hoping for the best."

A memorial service for Ron will be held on Saturday, April 20, 2019, at 2 PM in Korsmo Funeral Chapel, Moorhead.

To order memorial trees or send flowers to the family in memory of Ronald W. Capistran, please visit our flower store.