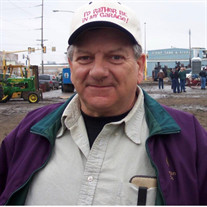 Ronald Stulz, 75, Glyndon, MN, passed away unexpectedly Sunday, October 25, 2020, at Eventide Fairmont, Moorhead, MN. Ronald Allen Stulz was born to Alfred and Myrtle (Muhle) Stulz in Moorhead on December 30, 1944. He graduated from the rural schoolhouse in Glyndon just down the road from the farm he grew up on. On June 10, 1968, he married Linda Green at Bethesda Lutheran Church, downtown Moorhead. They divorced in 1993. Ronald and Linda were foster parents to 33 babies over 13 years, ranging in ages from 2 days to 6 weeks, something he was very proud of. In 1967, he started driving truck for Kost Brothers Concrete. He continued to work for the same company, even through all the name changes, until finally retiring from Aggregate Industries in April 2011. Ronald carried many names such as Ronny, or Sir Ron when he was on a mission trip to Nicaragua, building schools or churches. He was gracious and giving of his free time helping others whenever and wherever he could. He was most known for his work at the Western Minnesota Steam Threshers Reunion in Rollag, MN. Ronny started volunteering his time at WMSTR in 1979, and through all the years his feet and mower covered every inch of the grounds. Over the years he rebuilt many old vehicles and was part of many car clubs. Many hours were put into every vehicle with great skill and perfection. He enjoyed traveling. If others did the planning, he was more than willing to tag along. Ron was a very simple man who loved to watch the creatures God had made run around his farm yard. You could always find him in his plaid shirt & blue jeans with suspenders as he worked in his shop creating yet another odd item that was always useful for his current project. Ron was never a “suit and tie” kind of a guy. From his crazy hats to his odd dry jokes, mostly about himself, he could always make a person laugh. Over the years, he taught people of all ages, who were willing to learn, how to run any power tool he had in the shop. Unfortunately, due to COVID-19, Ron’s last wish to go to college at UND by donating his body to science, was unable to be fulfilled. Ronald is survived by his two children, Cynthia (Lawrence) Karels of Moorhead, MN, Allen Stulz (Julie Tamble) of Lisbon, ND; grandchildren, Courtney (Kevin) Tangen of Arthur, ND, Austen (Kelley) Stulz of Arlington, Texas, and Zachary Stulz of Lisbon, ND. In addition, he is survived by his siblings, Shirley Manston, Dennis (Sandra) Stulz, Sharon (David) Villiard and Terry Stulz along with numerous nieces and nephews. Ron is also survived by all his friends that he considered family including the area farmers he helped over the years. He was preceded in death by his parents and one brother-in-law, Harlan Manston. Visitation will be Sunday, November 1, 2020, from 2pm-5pm in Korsmo Funeral Chapel, Moorhead, MN. Masks are required. Please come in casual wear as that is what Ron would have wanted.

The family of Ronald A. Stulz created this Life Tributes page to make it easy to share your memories.

Send flowers to the Stulz family.