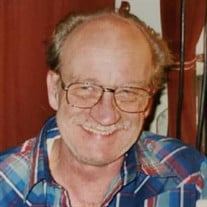 To view Ronald's Celebration of Life Service on Monday, January 3, 2022 at 11am. Please click on the link below: https://portal.memoryshare.com/memoryshare/videoplayer/ronald-saunders-8121789 Ronald James Saunders passed away at the age of 75, on Sunday, December 26, 2021, surrounded by his family at Sanford Hospital (Main Campus). Ronald was born April 22, 1946, to Eugene and Bernice (Bossert) Saunders in Aberdeen, SD. The family moved to Bismarck, ND, where he attended school. Ron joined the Army in 1963, where he served in the Vietnam War. When he returned to the US in 1966, he served in the Army Reserves. Ron met and married Sylvia Grinsteiner in June of 1969. They had three children: Mark, Chris, and Lisa. They made their home in Fargo, ND. Ron enlisted in the Navy Reserves in 1973, until he was honorably discharged in 1989, and then joined the Air National Guard in 1989 until retiring in 1995. He met and married Linda Kern on January 8, 1987, and made their home in Fargo, ND. Linda has five children: Judy, Bill, Wanita, Wamesa, and Rick. Ron spent most of his working years at the Fargo Foundry, which eventually became Mid-America Steel. He was proud of the union of which he was a part of and worked there for 33 years until he retired in April of 2004. He was also a lifetime member of the VFW. Ron loved bingo, bowling, cards, dice, fishing, pool, woodworking, and his family. Ron and Linda spent their summers at Pinehurst Resort where they have a camper. They also spent a week in April every year at Breezy Point Resort for his birthday. Ron formed special bonds with his family and friends that ran deep. Ron is survived by his wife, Linda, Fargo; children, Mark (Teresa) Saunders, Fargo, Chris (Stephanie) Saunders, Fargo, Judy (Steven ‘Carrot’) Paul, Waubun, MN, William (Jennifer) Beckman, Mahnomen, MN, Wanita (Christopher) Bray, Mahnomen, Wamesa (Sanford) Ropp, Bemidji, MN and Oriental, NC, and Richard (Chelsea) Beckman, Mahnomen; sisters, Sharon Heinert, Englewood, CO, Karen Roerick, Fargo, and Lori Wallace, Bismarck, ND; brothers, Danny (Diane) Saunders, Mandan, ND, and Donny (Shelly) Saunders, Cottage Grove, MN; along with numerous grandchildren, great-grandchildren, nieces, and nephews. Ron was preceded in death by his father, Eugene Saunders; mother, Bernice Meyer; stepfather, Ralph Meyer; infant daughter, Lisa Saunders; and twin brother, Donald Saunders. Memorials may be directed to St. Jude Children’s Research Hospital in lieu of flowers. A Visitation for Ron will be Sunday from 5:00 PM until 7:00 PM in Korsmo Funeral Chapel. His Funeral Service will be 11:00 AM, Monday, January 3, 2021, in Korsmo Funeral Chapel, Moorhead, followed by burial in Fargo National Cemetery. (Korsmo Funeral and Cremation Service, Moorhead, MN)

To view Ronald's Celebration of Life Service on Monday, January 3, 2022 at 11am. Please click on the link below: https://portal.memoryshare.com/memoryshare/videoplayer/ronald-saunders-8121789 Ronald James Saunders passed away at the age of... View Obituary & Service Information

The family of Ronald James Saunders created this Life Tributes page to make it easy to share your memories.

To view Ronald&#39;s Celebration of Life Service on Monday, January...

Send flowers to the Saunders family.