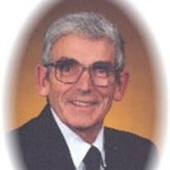 Rolland "Coal" Eugene Coalwell was born November 2, 1939, in Ada, MN, to Richard and Frances (Fahrlander) Coalwell. He graduated from high school in Detroit Lakes, MN, and worked for Swift Company and North Star Dairy, both in Detroit Lakes.
On September 22, 1957, Rolland married Patricia A. Wagendorf in Detroit Lakes. They made their home there and then moved to Moorhead for a short period of time. In 1960, they moved to Dilworth where they have made their home since. They built their first home across ditch 50 in Dilworth. Rolland continued his education at Moorhead State University, Moorhead.
Rolland worked in the flooring installation business for many years, eventually owning and operating Coal's Installation Service. He also worked for Building Specialties as an installation supervisor and assisted in managing the 59'er, the family owned business in Detroit Lakes. In 1998, Rolland retired due to illness. Rolland died Saturday, June 26, 2004, in the MeritCare Palliative Care Unit, Fargo, ND, at the age of sixty-four.
Rolland was a member of the Eagles, Detroit Lakes; the Lions, the Jaycees, and the Dilworth School Board, serving for thirteen years, seven of those as chairman. He served on the Clay County Vocational Cooperative Board, the Valley and Lakes Education Co-op Board, and the Ogema State Bank Board. Rolland was an active member of Dilworth Lutheran Church and was the founder of D-1000. He was a volunteer at MeritCare and also belonged to the National Guard and Army Reserves as a Staff Sergeant for eleven years.
Rolland was a humble man with a quick wit and wonderful sense-of-humor. He loved his family dearly and enjoyed his grandchildren.
Rolland is survived by his wife, Patricia, Dilworth; three sons, Rick (Sophie), Dumfries, Virginia, Mark, Maple Grove, MN, Keith (Michelle), Dilworth; five grandchildren, Rick II, Steven, Danielle, Lexie, and Drew; a sister, Audrey (Buddy) Williams, Detro
Visitation: Wednesday, June 30, 2004
4 - 7 with prayer service at 6:30,
Dilworth Lutheran Church,
Dilworth

To order memorial trees or send flowers to the family in memory of Rolland "Coal" Coalwell, please visit our flower store.