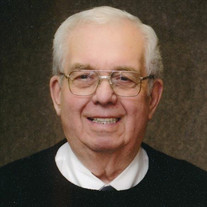 Roland E. Peterson, 77, of Moorhead, MN, died on Sunday, July 15, 2018, in Eventide on Eighth, Moorhead. Roland Eugene Peterson was born November 17, 1940, the son of Roland M. and Jane (Zirbes) Peterson, in Fargo, ND. He was raised in Moorhead and graduated from Moorhead High School. After graduation, Roland served in the U.S. Army. While stationed in Germany he was united in marriage to Elaine Hanson on April 6, 1960. Upon being discharged from the Army, Roland and Elaine moved to Fargo where they made their home. Over the years he worked as an independent mail contractor and auto mechanic in Climax, MN, until retiring in 1997. They then moved to Munson Lake, near Detroit Lakes, MN, and spent the winter months at their home in Apache Junction, AZ. Elaine died August 12, 2006. On August 18, 2007, Roland was united in marriage to Lucille M. Pike. They made their home in Arizona and Munson Lake before moving to Moorhead. Roland was a member of St. Paul’s Free Lutheran Church, Fargo, and Maranatha Free Lutheran Church Glyndon, MN. He loved cars and enjoyed going for drives. Roland will always be remembered for his ability to provide for his family through his strong work ethic, his great sense of humor and his charm. Roland is survived by his wife, Lucille, Moorhead; children, Randy (Barb) Peterson, Carrington, ND, Shelley (Jon) Lundborg, Moorhead, Steve (Barb) Peterson and Dan Peterson, both of Big Lake, MN, and Kathryn (Alan) Hiebert, Chanhassen, MN; grandchildren, Jana Peterson and Miranda Peterson, both of Fargo, Jacob Lundborg, Austin, MN, Abigail Lundborg, Minneapolis, MN, Noah Peterson and Joshua Peterson, both of Big Lake, and Peter and Jessica Hiebert both of Chanhassen; brother, Lynn (Dianne) Peterson, Willmar, MN; and Lucille’s children, Roberta (Scott) Oates and Alberta Ladymon. He was preceded in death by his parents and wife, Elaine. A Visitation for Roland will be one hour prior to his service. His Funeral Service will be Thursday, July 19, 2018 at 11:00 AM, in Korsmo Funeral Chapel, Moorhead, MN. Burial will be in Sunset Memorial Gardens, Fargo, ND. (Korsmo Funeral Service, Moorhead, MN)

The family of Roland Peterson created this Life Tributes page to make it easy to share your memories.

Send flowers to the Peterson family.