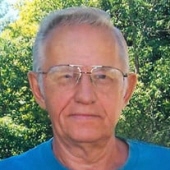 Roland "Ron" McNitt, 72, of Moorhead, MN, died Wednesday, April 1, 2015, in his home surrounded by his family under the care of Hospice of the Red River Valley.

Ron was born November 9, 1942, the first child of Howard and Jeanette (Wilson) McNitt, in Mason City, IA. He was raised and educated near Mason City, later moving with his family to Pine City, MN. Ron then enlisted in the U.S Army, serving from 1968 until 1970.

Ron worked as an over-the-road truck driver for many years. One of his greatest accomplishments was when he received his GED in 1986. On October 21, 1993, he was united in marriage to Patricia (Corbeil) Bakken in Moorhead. They established their home in Moorhead where he continued to drive truck. After retiring, Ron worked at Mac's Hardware Store in Moorhead.

A Gathering of Family and Friends for Roland will be one hour prior to his funeral service.

To order memorial trees or send flowers to the family in memory of Roland McNitt, please visit our flower store.