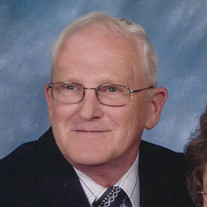 Roger E. Johnson, 78, of Fargo, ND, died on Thursday, November 7, 2019, in Sanford Health West Campus, Fargo. Roger Elmer Johnson, the son of Elmer and Lillian (Gunderson) Johnson, was born April 16, 1941, in Moorhead, MN. He was raised on a farm near Hitterdal, MN and graduated from Hitterdal High School in 1959. He then moved to Moorhead where he attended NDSU to study welding, before going to work at W.W. Wallwork in sales. On May 11, 1968, he was united in marriage to Barbara Miller in First Lutheran Church, Fargo. They made their home in the Fargo/Moorhead area and he continued to work for W.W. Wallwork and later Tri-State Welding. In 1984, Roger established the Johnson Company, which he owned and operated until retiring in 2005. He was a member of First Lutheran Church in Fargo. Roger enjoyed spending time at the lakes, fishing, hunting and woodworking. He especially enjoyed attending his grandchildren’s sporting events. He is survived by his wife, Barbara; daughters, Kristine (Dean) Mertz, West Fargo, ND, and Kim (Jim) Patterson, Fargo; grandchildren, Crystal Johnson, Brody and Dustin Mertz, Kiesha and Jade Harveland, and Tyler and Josh Patterson; great-grandchildren, Kaleigh, Lilliana and Ella; and many nieces and nephews. He was preceded in death by his parents; son, Kenneth; and brothers, Palmer, Gary and Wayne. A Visitation for Roger will be Wednesday from 5:00 PM until 7:00 PM, with a 6:30 PM Prayer Service, in Korsmo Funeral Chapel, Moorhead. His Funeral Service will be Thursday, November 14, 2019, at 11 AM in First Lutheran Church, Fargo. Burial will take place in Hawley Cemetery, Hawley, MN. (Korsmo Funeral Service, Moorhead, MN)

The family of Roger E. Johnson created this Life Tributes page to make it easy to share your memories.

Send flowers to the Johnson family.