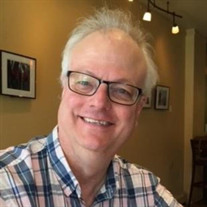 CELEBRATION OF LIFE SERVICE FOR ROD CAPISTRAN Rodney W. Capistran, husband to Jane and father to Madeline and Stuart, passed away on April 17, 2020. You are invited to attend a Celebration of Life Service on the anniversary of his passing. The service will be held on Saturday, April 17, 2021, 11 AM, at First Lutheran Church in Fargo, ND. All attending are asked to wear masks and be socially distanced. A time of sharing and luncheon will follow outdoors in the First Lutheran Parking lot. In addition, family and friends can attend virtually by following the livestream link provided by First Lutheran Church: https://vimeo.com/537343206 We are so grateful to gather and celebrate this wonderful man – husband, father, educator, musician, mathematician, comedian and gentle soul. The Rod Capistran Memorial Scholarships, one in Mathematics and another in Music, have been established for Fargo North High students through the Fargo Public Schools Foundation. Memorial gifts may be given on-line at: https://fargoschoolsfoundation.org ********************************************************************* Rodney “Rod” W. Capistran, 61, passed away peacefully on Friday, April 17, 2020, at Sanford Medical Center, Fargo, ND. His family was able to be at his side when he was removed from life support, after suffering a heart event on April 15. Our huge thanks to the Fargo Public School paraeducator that was in Rod’s class, Fargo Police, EMR attendants, Fargo Fire Department, and all the nurses and doctors that attended to Rod in his time of need. Rod was born in Minneapolis, MN, on April 30, 1958, to Ronald and Frances (Formo) Capistran. In 1971, the family relocated to Park Rapids, MN, where he graduated from Park Rapids High School in 1976. Before arriving in Park Rapids, Rod took up the trombone in the 7th grade. He loved to tell the story that he had hoped to play the trumpet, but his braces got in the way. Being a member of the Park Rapids Marching Band and Concert Band was truly a formative experience for him, as he became inspired to be a music education major in college. But, he was also a brilliant mathematician, so he became a double major while attending Bemidji (MN) State University ( BSU). While at BSU, Rod met Jane Linde, a fellow music education major from Moorhead, MN. They were married on June 27, 1981, and set up house in Iowa City where Jane was studying at the University of Iowa. Rod began teaching math in West Liberty, IA. The following year they switched roles; Rod became a graduate student at the University while Jane began teaching in the Iowa City Public Schools. In 1985, Rod received his master’s degree in Mathematics and in 1986, their daughter Madeline arrived on the scene, bringing such joy to her parents! Rod continued to work on his PhD until the summer of 1989, when he accepted a position at NDSU as Math Lecturer. In 1990, more joy came to his family when their son Stuart was born! In 2005, Rod completed his PhD in Math Education at the University of Minnesota and a big backyard party was held. Rod was such an incredibly talented man. He took his teaching very seriously, and always made sure that his students understood new math concepts. He treasured his students and colleagues at Fargo North High and enjoyed being part of student and faculty activities for the past seventeen years. He had a wealth of knowledge and skill when it came to telling jokes, playing the trombone, singing bass in choirs, movie trivia, funk music, and making creative drawings. For ten years he was Santa Claus at the FM Symphony Holiday Pops Concerts and was so quick when interviewing the young children as they climbed on stage to see Santa and conduct the orchestra. He was a longtime member of the Fargo Moorhead Choral Artists, First Lutheran Cathedral Choir and Dakota Brass. In addition to all these talents, Rod was first and foremost a devoted family man. He was a constant support to Jane, Madeline and Stuart, attending all their musical events, assisting wherever he could, and always telling them how proud of them he was. He was a loving son, brother, uncle, and friend, and was known for his quick wit and sense of humor at any gathering. Rod is survived by his wife, Jane Linde Capistran, Fargo; daughter, Madeline (fiancée’ Caleb Lambert), Iowa City; son, Stuart, St. Paul, MN; brother Keith (Pat) Capistran, Minneapolis; and many aunts, uncles, cousins, nieces and nephews. Rod was preceded in death by his parents. In lieu of flowers, memorials may be given to the Fargo Public Schools, The Fargo-Moorhead Choral Artists and The First Lutheran Church Cathedral Choir, Fargo. A memorial service will be held at a later date at First Lutheran Church. The family would like to thank the Fargo-Moorhead community for their continued support during this time. A memorial service will be held in First Lutheran Church, Fargo, at a later date.

CELEBRATION OF LIFE SERVICE FOR ROD CAPISTRAN Rodney W. Capistran, husband to Jane and father to Madeline and Stuart, passed away on April 17, 2020. You are invited to attend a Celebration of Life Service on the anniversary of his passing.... View Obituary & Service Information

The family of Rodney Capistran created this Life Tributes page to make it easy to share your memories.

Send flowers to the Capistran family.