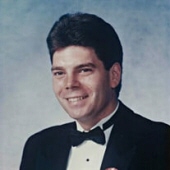 Robert Jay Dew III, was born February 10, 1966, the son of Robert Jay and Pamela (Offerdahl) Dew Jr, in Moorhead. He was raised in Moorhead and graduated from Moorhead High School. At the age of seventeen, he went to work for Don's Car Wash where he worked for thirty-three years. Over the years, Jay served in multiple capacities at the Car Wash, many of them as a supervisor/foreman.

Jay was known for his big heart and fabulous sense of humor. He loved spending time with his friends and was there when someone was in need. He enjoyed Star Wars, Pokemon, building and creating with Legos and the Minnesota Vikings.

He was preceded in death by his mother, Pamela; and his grandparents.

A Gathering of Friends for Jay will be Saturday, January 7, 2017, from 3 PM to 5 PM, in Korsmo Funeral Chapel, Moorhead.

To order memorial trees or send flowers to the family in memory of Robert "Jay" Dew III, please visit our flower store.