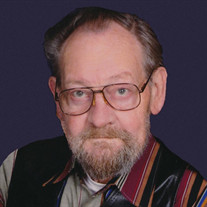 Robert “Bob” Dahlquist Sr., age 80, passed away December 31, 2019, on his own terms, under the care of Hospice of the Red River Valley and Rosewood on Broadway, Fargo, ND. Bob was born February 27, 1939, to Carl and Charlotte (Hoenke) Dahlquist in Grafton, ND. As the son of a depot agent, he grew up living in depots at many stops along the Northern Pacific Railroad. He literally could sleep through a train rolling right outside his bedroom. His family settled in Ulen, MN, in 1954. He graduated from Ulen High School in 1957. He lettered in basketball, football, track and baseball and met the love of his life, a cheerleader named Ruth. They were united in marriage February 22, 1958, in Bethlehem Lutheran Church in Ulen. Bob joined the US Navy in 1957 and was stationed in San Diego, CA, on the newly commissioned destroyer escort USS Evans (DE-1023) as a communications technician. Their mission was participating in the administration of Pacific territories held by the United States in trust under the United Nations. He served tours in Japan, Hong Kong, patrolling the volatile waters off Taiwan, the Philippines, and participated in maneuvers in Pacific coastal waters of the United States. He also trained with the navy of the Republic of Korea. Bob and Ruth made their home in the Fargo/Moorhead area after his honorable discharge from the US Navy in 1961. He attended NDSU and worked multiple jobs to support his growing family. In 1962, he began his career at American Telephone and Telegraph where he was employed for over 30 years. He held FCC licensure in tele-communications. Bob also worked part-time for WDAY as a cameraman, driving delivery truck for local florist Marty Holsen, driving for Doyle Checker Cab, and as a real estate agent for Keifert Realty. Bob and Ruth were both only-children and vowed to have a house full of kids. Their home in Moorhead was the site of every holiday, birthday and special occasion, welcoming family and every friend their kids brought home for fifty-two years. Bob continued his education at MSUM developing his own curriculum for a degree in water conservation/resource management. He was an inventor and was developing a wind generator at the time of his death. When he wasn’t working on inventions, his favorite thing to do was play games and go out to eat. He taught his kids and grandkids many card games and loved to play Acquire. Bob took his games seriously and his family experienced first-hand his competitive spirit. “Quit your dingin!” Bob is survived by children, Renai (Brent) Ehrichs of Moorhead, Robert Jr (Lorie) of Fargo, Rochelle “Shelly” (Joel) Dahlquist of Moorhead, Ryan Eric (Linda) of Scottsdale, AZ, and Rolin (Jenn) of Reston, VA; and grandchildren, Heather, Benjamen, Matthew, Julian, Chelsea, Keely, Dennis and Alexa. Bob was preceded in death by his parents, beloved wife, Ruth, and her parents, Orlin and Gladys Pratt. The family requests that in lieu of flowers, donations be made to Hospice of the Red River Valley or a favorite charity. A Gathering of Friends will be one hour prior to Bob’s service. His Memorial Service will be Saturday, February 22, 2020, at 2 PM in Korsmo Funeral Chapel, Moorhead. Burial will take place in Prairie Home Cemetery, Moorhead. (Korsmo Funeral Service, Moorhead)

The family of Robert D. Dahlquist, Sr. created this Life Tributes page to make it easy to share your memories.