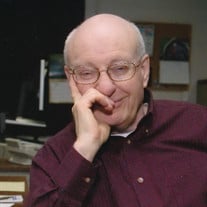 “Someday you will read in the paper that Bob Lind is dead. Don't you believe a word of it! At that moment I will be more alive than I am now …” (D.L. Moody, adapted) Robert Frederic Lind’s earthly life began on March 2, 1933, at Deaconess Hospital in Grand Forks, N.D., He was the third child and only son of Elmer and Iva (Williams) Lind, Niagara, N.D. His earthly life ended on Aug. 2, 2021, at Bethany on University in Fargo. Bob was raised in Niagara where one of his first jobs was a newspaper route for The Grand Forks Herald. He graduated from Niagara High School in 1950. He attended the University of North Dakota in Grand Forks from 1950 to 1951 and the University of Minnesota from 1951 to 1952. Bob served in the Army with the Army Security Agency from 1952 to f1955. He trained at Fort Riley, Kan., and Fort Devens, Mass., then served in Germany from 1953-1955. Because his work was in intelligence, Bob often claimed (with a characteristic twinkle in his eye) that he single-handedly held back the Russians and helped America win the Cold War. He graduated from the U of M with a degree in journalism in 1957. It was during this second term of study at the U of M that he met the one and only girl for him, Marcella “Marcie” Oberg, of Hadley, Minn. They were married Feb. 14, 1959, in Minneapolis. Bob worked for The Spring Valley (Minn.) Tribune from 1958 to1961, then owned and operated The Larimore (N.D.) Pioneer from 1962 to 1969. He was employed by The Forum of Fargo-Moorhead from 1969 to 1998, holding roles including copy editor, city editor, religion editor, lifestyle feature writer and columnist. He retired in 1998 and continued to work part-time as a columnist from that year until 2021. His Neighbors columns have continued to appear regularly in The Forum despite his stroke and subsequent hospitalizations, because he made it a habit to work many months ahead. Bob loved life on this earth. In addition to being energized by working alongside his fellow journalists, he deeply enjoyed listening to music, reading about history, savoring a piece of pie, following various sports and athletes, traveling in Europe during his military service and traveling in the U.S. to visit family. All along the way it was about meeting people, learning their stories and passing those stories along to others. He believed that everyone had a great story, and it only took a short time for him to discover that story in anyone he met. He was one of the world’s most avid, and loyal, Minnesota Twins fans, and could quote any statistic about any player or season. Much more important, though, was his deep love of Christ. Bob placed his faith in Christ as his own needed and personal Savior while a student at UND, thanks to a fellow student named Bob Glockner. The two Bobs shared a life-long friendship. Bob Lind loved to read and study the Bible, and his 300+ Bible memory verse cards, well-thumbed, yellowed and worn thin, were always with him in packs of ten, in a pocket, for review throughout the day. Following Christ was not a system nor a religion to Bob. It was a living relationship with the living God. His walk with his friend, redeemer and Savior Jesus was part of every day he spent in his earthly body. He very much looked forward to leaving his earthly body behind and to meeting his Savior face to face. “Therefore, being always of good courage, and knowing that while we are at home in the body, we are absent from the Lord—for we walk by faith, not by sight—but we are of good courage and prefer rather to be absent from the body and to be at home with the Lord.” (II Cor. 5:6-8) Bob is at home! He would love for you to get to know Jesus Christ, repent and put your faith in Him, and join him in that home, more alive than you could ever be here on earth. Bob is survived by his beloved wife, Marcie, Fargo; daughter Laurie, Fargo; sons Kevin, Fargo; Keith (Diana), Moorhead, and Mark (Christine), Everson, Wash.; 14 grandchildren, and many well-loved nieces, nephews and cousins. He was preceded in death by his parents, Elmer and Iva Lind, and his two sisters, Alice Ann (Lind) Christian and Vada (Lind) Higbee. Visitation for Bob will be Sunday, August 8, 2021, from 3 – 5 PM, with a prayer service and time of sharing at 5 PM, in Korsmo Funeral Chapel, Moorhead. His funeral will be Monday, August 9, 2021, at 11 AM, in Bethel Evangelical Free Church, Fargo. Burial, with military honors, will be in Riverside Cemetery, Fargo. Memories and condolences may be shared at www.korsmofuneralservice.com. If you wish to donate to a charity in his honor, please do so at www.jailchaplains.com. To view the livestream of Bob's service, please follow this link: https://boxcast.tv/view/bob-lind-funeral-august-9th-2021-371060

The family of Robert "Bob" Lind created this Life Tributes page to make it easy to share your memories.

Send flowers to the Lind family.