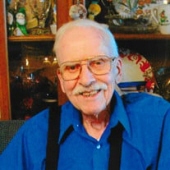 Robert, the son of Helmer and Myrtle (Bulson) Hanson, was born in Carrington, ND, on July 5, 1934. As a small child, he lived with his family in Carrington and in Twin Valley, MN. In 1944, they moved to Moorhead, where Robert had lived since.

Robert overcame significant health issues as a child and went on to attend Dakota Business College in Fargo. He worked for a number of years as the foreman of the woodworking department for Silverline Boats in Moorhead.

Robert is survived by a sister, Frona (Kenneth) O'Leary, Moorhead; and a number of nieces and nephews. He was preceded in death by his parents and two sisters, Betty Frisinger and Lois Davidson.

Visitation will be one hour prior to the funeral.

To order memorial trees or send flowers to the family in memory of Robert A. Hanson, please visit our flower store.