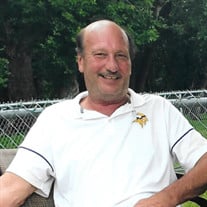 On Sunday, September 26, 2021, Rickey “Rick” Allen Pender, loving husband, father, and grandfather, passed away at the age of sixty-six. Rick was born June 9, 1955, in Moorhead, MN, to Gerald and Dorothy (Ross) Pender. He went to Barnesville (MN) public schools and graduated in 1973. Rick served in the US Army from 1974 to 1980. He owned the Hill Lounge in Glyndon, MN, for twenty-three years. He then spent the next fifteen years as assistant manager at Fargo Cashwise in the meat department. On March 20, 2002, Rick married Michele Nordick. Between the two of them, they raised their six children. They were the modern-day Brady Bunch. Rick loved spending time with his family. He also enjoyed golfing, hunting with his sons, and hosting gatherings with different card games, dart tournaments and sports competitions. He made sure to attend his kid’s and grandkid’s events, supporting all their activities. He was a great entertainer; whether it be re-telling a funny memory, playing the accordion or making sure everyone was fed and having a good time around him. Rick is survived by his wife, Michele; his three children, Courtney (Jason) Zentgraf, Nickolas (Mallorie) Pender, and Travis (Heather) Pender; his three step-children, Jeremy (Andria) Nordick, Shannon (Kirk) Nordick, and Jamie Nordick; thirteen grandchildren; and three sisters, Barb (Ken) Wirtz, Cindy (Tom Griffin) Leach, and Jeri-Lee Reep. Visitation for Rick will be Thursday, November 4, 2021, from 5 – 7 PM with a prayer service at 7 PM, in Korsmo Funeral Chapel, Moorhead. A Life Celebration service will be Friday, November 5, 2021, at 11 AM, in Dilworth Lutheran Church, Dilworth, MN.

The family of Rickey Pender created this Life Tributes page to make it easy to share your memories.

Send flowers to the Pender family.