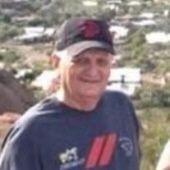 Richard Francis Medley was born May 5, 1948, in Huron, SD, to Francis and Dorothy (May) Medley. He attended school in Woonsocket, SD, until ninth grade.

Dick took basic training at Fort Benning, GA, and then served in Vietnam from March of 1969 to December of 1970. Dick worked in auto sales for many years but spent the majority of his career at Luther Family Buick GMC in Fargo, ND.

Dick is survived by his sisters, Diana (Robert) Tang of Sanibel Island, FL, and Sandra Griggs of Moorhead, MN. He was preceded in death by his parents.

There will be a gathering of friends and sharing of memories from 4 - 6 PM, Monday, October 18, 2021, in Korsmo Funeral Chapel, Moorhead. Dick's final resting place will be with his family in Fairview Cemetery, Wahpeton, ND.

To order memorial trees or send flowers to the family in memory of Richard "Dick" Medley, please visit our flower store.