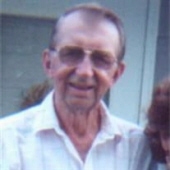 Raymond C. Erickson, 77, Dilworth, MN, died Wednesday, May 19, 2004, in Veterans Affairs Medical Center, Fargo, ND, surrounded by his loved ones. He has found peace after a long struggle with emphysema.
Ray was born September 22, 1926, to Conrad and Mabel (Sather) Erickson, in Clearbrook, MN, where he grew up and attended school. He served in the army during WW II, and was stationed in the Philippines and Korea, where he received numerous decorations and citations
On April 29, 1952, Ray married Alvina Schieffer in Browerville, MN. They moved to Dilworth in 1957. Ray worked for thirty-eight years at Branick's Manufacturing in Fargo, where he served as union steward for twelve years, which he truly enjoyed. After he retired, he worked part-time for Clay county for eight years. Ray was a lifetime member of Teamsters Local 116 and Moorhead VFW, where he also did custodial work.
Ray was an avid outdoorsman. He enjoyed hunting, fishing and gardening. But his greatest joy came when he was surrounded by his children and grandchildren.
Ray is survived by his loving wife; two sons, Royal (Mary), and Rick (fiancée, Cora Fischer), both Moorhead, MN; one daughter, Cathy (Bobby) Martin, Dilworth; grandchildren, Justin and Devin Erickson, Matt and Kari Erickson, and Katie Martin; step grandchildren, Shannon, Rochelle and Jeff; step great-grandchild, Crystal; and many nieces and nephews. Ray was preceded in death by his parents; his sister and brother-in-law; a son, David; and a granddaughter, Heidi.
Visitation: Friday, May 21, 2004 4:00 PM - 7:00 PM
Korsmo Funeral Chapel, Moorhead

To order memorial trees or send flowers to the family in memory of Raymond C. Erickson, please visit our flower store.