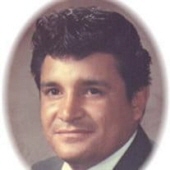 Raymond James Arechigo was born May 10, 1942, to Joseph and Eloise (Corona) Arechigo in Moorhead, MN, where he grew up and received his education. After school, he worked for Texaco in Fargo, ND.

Raymond married Karen Meyer and they had two children, Rick and Laura. Raymond worked as a bricklayer for various companies in Fargo, Moorhead, Minneapolis, MN, and the surrounding area.

On November 5, 1979, he married Jean Kramlich in Sisseton, SD, and they made their home in Moorhead. Together they had two sons, Michael and Aaron, and a daughter, Shawna. Raymond was currently employed with Haugen Masonry Contractors, Moorhead. He also owned and operated, with his wife Jean, Wild Knights Steakhouse and Saloon, Casselton, ND. Raymond died July 8, 2004, in his home, Moorhead, at the age of sixty-two.

Raymond loved to play handball at the YMCA and softball. He enjoyed life and loved his friends and family, always getting them together for 4th of July reunions.

He is survived by his wife, Jean; a daughter, Laura Arechigo, Minneapolis; three sons, Rick (Linda), Hillsboro, ND, and Michael and Aaron, both of Moorhead; a nephew who was like a son, Scott Kramlich, Bismarck, ND; six brothers, Benny, Anoka, MN, Arband, Moorhead, Rudy, Jim and Tony, all of Fargo, and Patrick (Gwen), Sioux Falls, SD; five sisters, Susie Morales, Texas, Margaret Schweitzer, Judy (Juan) Solis, and Gloria (Russell) Cossette, all of Moorhead, and Rosie Arechigo, Prosper, MN; four grandchildren, Tyler and Jade Arechigo, and Isabelle and Zoe Marcil; and many nieces and nephews.
He was preceded in death by a daughter, Shawna; his parents; and three brothers.

In lieu of flowers, memorials preferred to Make A Wish.

To order memorial trees or send flowers to the family in memory of Raymond Arechigo, please visit our flower store.