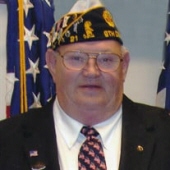 Paul William Anderson was born on October 31, 1939, to George and Edith (Peterson) Anderson, in Tyler, MN. He was baptized and confirmed at Sillerud Lutheran Church, Balaton, MN. He graduated from Ruthton (MN) High School in 1957. He attended the University of Minnesota and Augsburg College in Minneapolis, MN. He was drafted into the Army in 1964 and was on the football team until he was stationed in Germany during the Vietnam War.

He was a member of Bethesda Lutheran Church, choir member, on the church council, and a church treasurer. He was a lifetime member of the American Legion Post 21 in Moorhead. He served as Post Commander, was on the finance committee, the Boy Scout committee, and was editor of the monthly District 9 newsletter. He also made arrangements for the color guard at funerals.

He enjoyed reading, crossword puzzles, music and all sports. He was an accountant, farmer, school bus and charter bus driver, and a construction worker. While living at the VA home in Fergus Falls, he was the "Postman," Resident Council president, choir member, food committee, and participated in all activities.

He was preceded in death by his parents; one infant sister, Rhoda; a sister-in-law, Mary Ann; and his stepmother/aunt, Ruth.

The family would like to thank all of our family and friends for the cards, flowers, and prayers during this time. Your care, concern, and thoughtfulness is greatly appreciated. A special thank you to the staff of the Fergus Falls Veterans Home.
The funeral service for Paul will be held Friday, February 3, 2017, at 10:30 AM, in Bethesda Lutheran Church, Moorhead. Visitation will be one hour prior to the funeral, at the church. Burial will be in the Minnesota State Veterans Cemetery, Little Falls, MN.

To order memorial trees or send flowers to the family in memory of Paul W. Anderson, please visit our flower store.