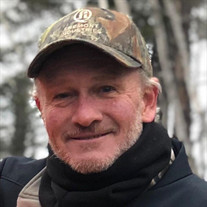 Surrounded by family, in the arms of his loving wife, Paul R. Stock, 62, of Detroit Lakes, MN, died at Essentia Hospital in Fargo, ND, March 7, 2020, from complications of ALS. Paul was a man whose life was multi-dimensional, encompassing a love of family, friends, nature and the outdoors, of the earth and universe, and an unparalleled interest in reading, research and preserving the environment. Paul Robert Stock was born in Fergus Falls, MN, on August 2, 1957, the first child of James (Jim) and Joyce (Reierson) Stock. When he was three years old, the family moved to a farm near Waubun, MN, where they lived for four years until moving to the farm by Mahnomen where Paul grew up with his eight siblings. He attended St. Michael's Catholic school from grades 1-6. Here one of his teachers was a young nun, Sr. Leota, who shared and recognized his love of learning and has remained one of his lifelong friends. After graduating from Mahnomen High School with the class of 1975, Paul attended the University of MN-Morris where he earned a Bachelor's Degree with Distinction in Geology. After graduation in 1979, Paul completed additional graduate level geological studies at Louisiana State University and Wright University. Paul retired in 2018 following a distinguished career as a hydrologist. From 1980-1988, Paul was an exploration geologist with North American Coal Corporation. From 1988-1998, he worked as a project manager and hydrogeologist with Delta Environmental Consultants where he worked on hundreds of petroleum remediation projects. In 1999, he began his career at the MPCA (MN Pollution Control Agency) as a senior hydrologist retiring from his position at the Detroit Lakes branch in 2018. Paul was recognized as the principal author of documents on remediation system design, and beginning in 2010, he served as a course instructor for the ITRC (Interstate Technology and Regulatory Council). On May 11, 1985, Paul was united in marriage to Ronda Carney at St. John's Catholic Church, Wahpeton, ND. Paul's jobs took the young couple across the country: Cleveland OH; Charlotte NC (where their two sons were born); Coon Rapids MN; and finally the last 20 years in Detroit Lakes MN. Paul loved the home the family built in Detroit Lakes with its natural setting among the trees and wildlife. As a small child, Paul was fascinated by birds and could identify any species! Watching the deer cross his back yard was a never ending joy. Much of his free time as a child was spent outdoors, exploring, playing games, swimming in the river and enjoying the companionship of his 6 brothers and all the Stock cousins who lived just a path away across the field. Paul's love of the outdoors never lessened. He loved setting up camp and hunting deer and grouse in the Grygla area in the fall and especially enjoyed the camaraderie of his friends and family as they shared bragging rights about their experiences, usually around the campfire. Beginning in 1994, Paul and Ronda spent part of every February on Isla Mujeres a place Paul came to love and where they renewed their 25th Wedding Anniversary vows. For many summers, they kept a camper at Pinehurst Resort and enjoyed fishing, games, parties and lake life with friends and family. Paul was an avid gardener and did not hesitate to brag about the vegetables he grew. He loved having a freezer full of wild game and vegetables to cook gourmet meals with his family. Paul enjoyed being with people, having long conversations, reading (especially about scientific topics) and watching movies at home. He enjoyed going to concerts featuring stars of the 70's. Paul was blessed with good friends (the two Mikes dating back to college days and Dave his friend and neighbor) and others he met during his long career. He was especially proud of his sons and their accomplishments! Shortly before Paul was diagnosed with ALS in May of 2019, his first grandchild was born and the day before he died, his second grandchild was put into his arms. Paul is survived by his wife of nearly 35 years, Ronda of Detroit Lakes; son Alex (Katie) and their two daughters, Lauren and Leah of Moorhead; and his son Andrew (Emily) of Plymouth. In addition to his parents, he is survived by seven siblings: Greg, Mahnomen; Cathy, West Fargo; Susan (Jeff) Trnka, West Fargo Tom (Connie) Mahnomen; Andy (Bobbi Jo Doerfler) Parker, SD; Charlie, Hillsboro ND; Jon (Angie) Moorhead. He is also survived by his mother in law, Karen Engstrom, Wahpeton and brother-in-law, Rick Carney (Kathy) of Waukesha, WI; plus many nieces and nephews. He was preceded in death by his brother, Jerry, his fathers in law and his grandparents. An outdoor celebration of life for Paul will held at our home, 30298 Oakland Drive, Detroit Lakes, on Sunday, August 2, 2020, from 1 - 4 PM. We will have time to reflect on our memories, share stories of Paul's life, and share refreshments. For health reasons, Covid sensitivity will be observed.

Surrounded by family, in the arms of his loving wife, Paul R. Stock, 62, of Detroit Lakes, MN, died at Essentia Hospital in Fargo, ND, March 7, 2020, from complications of ALS. Paul was a man whose life was multi-dimensional, encompassing a... View Obituary & Service Information

The family of Paul Stock created this Life Tributes page to make it easy to share your memories.

Surrounded by family, in the arms of his loving wife, Paul R....

Send flowers to the Stock family.