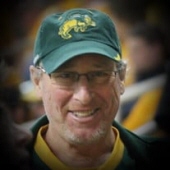 Paul Scott Morlock, 52, passed away Saturday, October 8, 2016, at Sanford Palliative Care in Fargo, ND, with his loving family and friends by his side.

Paul was born May 31, 1964, to Carl and Della Mae (Fischer) Morlock in Moorhead, MN. After graduating from Moorhead High School, where he played football and wrestled, he attended Concordia College where he had a successful wrestling career. Upon graduation, he started a career in sales, including Cass-Clay Creamery for twenty-one years, RDO, and Simpson Strong-Tie.

Paul married the love of his life, Jean Ecklund, on June 15, 1984. Due to Paul's great love of cold winters and wanting his children to be Spuds, they stayed in Moorhead and raised their four children, Cassandra, Brett, Chase, and Lance. He loved hunting, fishing, attending all Spud sporting and theater events (Once a Spud, always a Spud) and Bison football games. He enjoyed socializing with fellow neighbors and family with the champagne of beers, Miller High Life Lite. Paul always drank Lite beer because he was "watching his figure".

Paul was loved for his big heart and his willingness to help and be there for anyone. He loved to tease and joke and his smart-aleck retorts always brought a smile to everyone's face. Paul was very excited to know he was going to be a grandfather in the spring.

Paul was preceded in death by his father, Carl; mother-in-law, Dorothy Ecklund; and brother-in-law, Scott Ecklund.

To order memorial trees or send flowers to the family in memory of Paul S. Morlock, please visit our flower store.