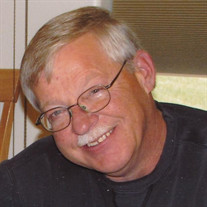 Paul E. Morehead, 62, of Moorhead, MN, passed away peacefully after losing his battle with cancer on Sunday, October 13, 2019, in his home surrounded by family. Paul Edward Morehead was born June 12, 1957, to Charles and Evie (Benson) Morehead in Moorhead. Paul was baptized and confirmed in the Catholic faith. He graduated from Moorhead High School in the class of 1975 and then served in the US Navy for four years. On July 25, 1992, he was united in marriage to Tracy Nordine in Moorhead, where they established their home. Paul worked for NSP/Xcel Energy for 33 years, retiring in 2014. He loved fishing, football, golf, playing cards, coin collecting, taking trips to the casinos with Tracy, and spending time with family and friends. He was great at instigating things and then sitting back and watching the end results. Paul is survived by his wife, Tracy; his father, Charles (Kay); sisters amd brother, Sr. Cheryl Morehead, Linda (Mike) Smith, Kevin (Dorene) Morehead, and Mary (Lyle) Hovelson; sisters-in-law, Cheryl (Dick) Bergeron, Joy (Pat) Waddick, Judy (Vernon) Bahr; and numerous nephews, nieces and great-nephews and nieces. He was preceded in death by his mother; sister, Christine; Tracy's parents, Raymond and Joyce Nordine; her brother, Rick Nordine; and nephews, Daniel Bergeron and Tom Hinkle. Paul was a jeans and sweatshirt guy and the family would like people who come to the memorial service to be casually dressed. A Gathering of Friends for Paul will be Saturday, October 19, 2019, beginning at 9:30 AM followed by a Memorial Service at 10:30 AM in Korsmo Funeral Chapel in Moorhead. (Kormso Funeral Service, Moorhead, MN)

Paul E. Morehead, 62, of Moorhead, MN, passed away peacefully after losing his battle with cancer on Sunday, October 13, 2019, in his home surrounded by family. Paul Edward Morehead was born June 12, 1957, to Charles and Evie (Benson) Morehead... View Obituary & Service Information

The family of Paul Morehead created this Life Tributes page to make it easy to share your memories.

Send flowers to the Morehead family.