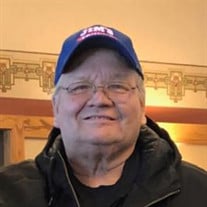 Patrick D. Fortier, 66, of Glyndon, MN, passed away on Friday, September 27, 2019, in his home. Patrick was born January 15, 1953, in Crookston, MN, to Octave and Cecilia (Duffy) Fortier. Pat went to school in Crookston and attended a trade school for diesel engineering. After trade school, he became a self-employed truck driver, which he did for over 30 years. Pat Pat later made his home in Glyndon, where he raised his three children, Victoria, Joseph, and Lori. Pat was known to be a very simple man that would do anything for his loved ones. Pat loved spending time with his grandchildren working on projects and just tinkering. He also had a strong love for animals, especially dogs. One of Pat’s favorite activities was working on vintage snowmobiles. He would drive for miles on the hunt for the next one he could work on. He enjoyed this hobby so much that he would often be found working on one while watching MASH in his recliner, in the living room. Pat is survived by his children, Victoria (Larry) Mosloff, Joseph (Tamilynn) Fortier, and Lori (Theodore) D’addario; grandchildren, Patrick, and Cecelia Mosloff, Shelby, Jay, Morgan, and Stella Fortier, and Johanna D’addario; and sisters, Jean Hanson and Alice Cumming. He was preceded in death by his parents, Octave and Cecilia; brothers, Robert and Barnard; sisters, Annamae, Emily, Rose Mary, and Ellen. A Memorial Service for Patrick will take place on Thursday, October 3, 2019, at 2 PM, with a visitation one hour prior, in Korsmo Funeral Chapel, Moorhead, MN. The Celebration will continue at JTF Trucking, 133 Stockwood Ave., Glyndon, MN, following the service.

Patrick D. Fortier, 66, of Glyndon, MN, passed away on Friday, September 27, 2019, in his home. Patrick was born January 15, 1953, in Crookston, MN, to Octave and Cecilia (Duffy) Fortier. Pat went to school in Crookston and attended a trade... View Obituary & Service Information

The family of Patrick D. Fortier created this Life Tributes page to make it easy to share your memories.

Send flowers to the Fortier family.