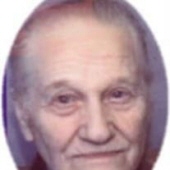 Palmer A. Anderson was born April 21, 1915 near Walcott, ND to Adolph and Hilda (Wolden) Anderson. He grew up and attended school near Walcott.
Palmer served his country in the U.S. Army during World War II in the European theater and was honorably discharged. He was married to Mae E. Oveson March 15, 1955 in Sisseton, SD. They made their home in Fargo, ND since that time. For 29 years, Palmer was employed by Great Northern Railroad in the freight department. Palmer loved his family and was a patriotic American, who also enjoyed gardening & working with old cars.
He died on Wednesday morning, April 12, 2006 at Innovis Hospital in Fargo at the age of 90 years.
Palmer is survived by his wife, Mae; a daughter, Sandra (Joseph) Sigmund of Peru, IL; 2 grandchildren, Anna Mae & Gina Rae; 3 sisters, Marion Owen of Mansfield, OH, Arlene Nowak of Ft. Collins, CO, and Elaine Nicklaus of Fargo; 3 brothers, Jervis (Delores) Anderson, Lyle (Maxine) Anderson, and James (Frances) Anderson, all of South Bend, IN.
He was preceded in death by his parents, 2 brothers and 5 sisters.
Visitation: Sunday, April 16, 2006, 4-6 pm, Korsmo Funeral Chapel, 409 8th St. S., Moorhead, MN

To order memorial trees or send flowers to the family in memory of Palmer Anderson, please visit our flower store.