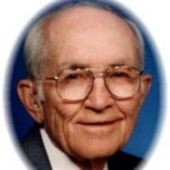 Otto Wiedmann, the son of Philip and Dorothea (Miller) Wiedmann, was born in a sod house west of Venturia, ND, in McIntosh County on September 10, 1912. His brothers were Adolph "Atzie" and Julius; sisters were Martha (Bertsch), Lydia (Nelson), Frieda (Bower), Annetta (Striebel), and Lea (Collins/White).
He graduated from Ashley (ND) High School in 1931, and taught grade school in Venturia from 1931 to 1937 while attending Ellendale (ND) Normal Industrial School during the summers. In 1937 he moved to Fargo, ND, to attend Dakota Business College. After graduating he worked for the ND Taxpayers Association and Northern States Power Company before starting a 34-year career with the US Postal Service in Fargo.
On June 15, 1941, Otto married Leah Gladys Krause from Lehr, ND. Three sons were born to them - Ronald Otto (1942), Dean Burdette (1947), and James Brent (1949). In October 1943, Otto was inducted into the US Army at Fort Snelling, MN. After completing basic training, he was sent to Italy where he became an administrative assistant in the 7th Army Headquarters Company which advanced from the French Riviera to the Rhine, and through southern Germany, where Otto was at the conclusion of the war. After the war, Otto returned to his job at the Fargo Post Office, and was also treasurer of the Fargo Postal Employees Federal Credit Union until he retired in 1974.
The Wiedmann family was active in the Calvary Baptist Church of Fargo, where Otto was treasurer and trustee for many years. During their retirement years, Otto and Leah spent the winters in Phoenix, AZ. In 1992 they sold their winter home and moved back to Fargo where they lived together until an illness last month made it necessary for Otto to become a resident of Emmanuel Nursing Home in Detroit Lakes, MN, where he passed away peacefully on June 3, 2004, at ninety-one years of age.

Otto is survived by his wife, Leah, their sons, Ron (Glenna), Fargo, Dean (Linda), Detroit Lakes, and Jim (Pam), Phoenix; ten grandchildren; sixteen great-grandchildren; and his sisters, Lydia (Ned) Nelson, Seattle, WA, and Lea White, Aberdeen, SD.
Visitation for Otto will be Sunday, June 6, 2004, from 5-8 PM, in Calvary Baptist Church, Fargo. The funeral will be Monday, June 7, 2004, at 1 PM, in the church. Burial will be in Sunset Memorial Gardens, Fargo.
Memorials may be directed to the Calvary Baptist Church Building Fund.

To order memorial trees or send flowers to the family in memory of Otto Wiedmann, please visit our flower store.